On Friday March 2, 2012, we noticed Sunspot Group 1429 moving onto the Earth facing part of the Sun. The NOAA space weather service informed us that the magnetic topology was complex and this was a cell to watch out for. Sure enough, on Sunday night (March 4, Eastern time) the Sun emitted a short X1 flare. We all felt a bit better, because this often will relax the magnetic field. And since it was well off on the Eastern limb of the Sun, any coronal mass ejection (CME) should have missed us. 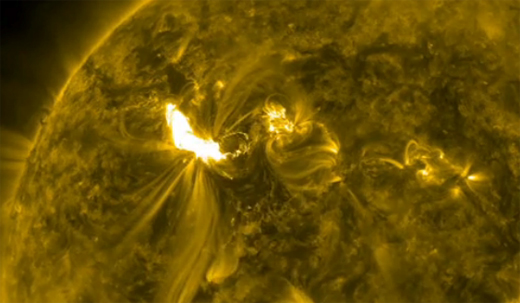 We were not so lucky. The CME only landed a glancing blow, but the system wound itself even tighter and flared Tuesday night as a very large X5 flare -- the second largest of the current solar cycle -- followed immediately by another X1. The leading edge reached us at about 12:30am, leading to a series of over-night alerts (of course).

The instruments are now in "safe mode," that is, turned off, stowed and protected from the flare. NOAA tells us to expect the CME to arrive in the early hours of Thursday March 8, but to take perhaps 12 hours to clear. We are hopeful to restart science around 2pm on March 8th, but may need to wait as late as 10pm at night. Meanwhile if you are up before dawn Thursday, look north for a possible appearance of the aurora due to all of this solar activity.

More information on this latest solar flare can be found at:
http://www.nasa.gov/mission_pages/sunearth/news/News030712-X1.5.html