On August 21, 1995, the field of astrophysics lost one of its greats. Seventeen years ago this week, Subrahmanyan Chandrasekhar passed away. Chandra, as he was known to his friends and colleagues, was widely regarded as one of the foremost astrophysicists of the 20th century.

Of course, Chandra couldn't have known that less than four years later, his name would be used for another purpose. In 1999, NASA announced the results of the contest to rename the Advanced X-ray Astrophysics Facility, or AXAF. There were over 6,000 entries for this contest from all 50 states and over 60 countries. 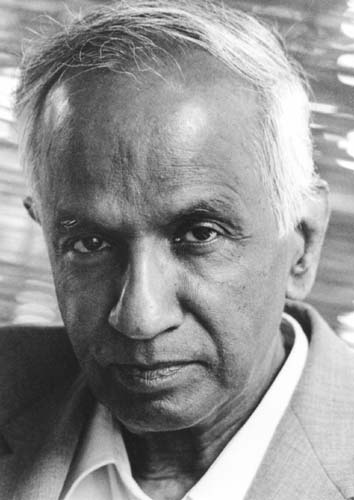 AXAF was renamed the Chandra X-ray Observatory in honor of the late Subrahmanyan Chandrasekhar. Tyrel Johnson, a student from Idaho, and Jatila van der Veen, a physics and astronomy teacher from California, submitted the winning name and essays. (Photo: AIP)

The winning name was, of course, Chandra, which means also means "luminous" or "Moon" in Sanskrit. Today, many people know the name of "Chandra" to mean one of NASA's Great Observatories and one of the most important telescopes in high-energy astrophysics.

We thought it was also appropriate to take a moment this week to acknowledge the man who helped immensely advance our understanding of the Universe. We hope that he'd be proud that the telescope bearing his name continues on the same mission.

Tags:
Chandra
Disclaimer: This service is provided as a free forum for registered users. Users' comments do not reflect the views of the Chandra X-ray Center and the Harvard-Smithsonian Center for Astrophysics.
Please note this is a moderated blog. No pornography, spam, profanity or discriminatory remarks are allowed. No personal attacks are allowed. Users should stay on topic to keep it relevant for the readers.
Read the privacy statement