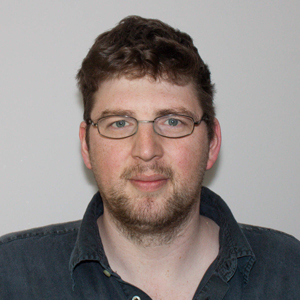 We are delighted to welcome Robin Barnard as a guest blogger today. Robin is currently a research fellow at the Harvard-Smithsonian Center for Astrophysics; originally from the UK, he has greatly enjoyed living in the US for 3 years. He got his PhD at the University of Birmingham, and a MPhys (Hons) in Physics with Astrophysics from the University of Manchester; thanks to a quirky convention, he has considerably more letters after his name than in it! He was previously employed as a research fellow at the Open University.

I came to the USA to hunt black holes. Not nearby ones (that might be a bit scary), but ones in the nearby spiral galaxy known as the Andromeda Galaxy, or M31. As Grant & Naylor pointed out in the BBC TV series Red Dwarf: the thing about black holes, their main defining feature, is that they’re black; and the thing about space, the basic space color, is it’s black. This makes lone black holes very hard to see! However, black holes that are able to snatch material from an orbiting companion star can release huge amounts of energy, mostly as X-ray radiation. Such systems are called X-ray binaries (XBs), and neutron star plus normal star XBs are also possible (and indeed are more common). In our Galaxy, black hole binary systems with low-mass companions go unnoticed for long periods of time, occasionally exhibiting huge outbursts in X-rays; for this reason, they are known as X-ray transients. The similarity between known black hole X-ray transients and other low-mass X-ray transients suggests that most low-mass X-ray transients contain black holes.

An artist’s impression of an X-ray transient in M31. This is a binary system containing a black hole, on the left, pulling material away from a star similar to the Sun, on the right. Credit: Astronomical Illustrations and Space Art, by Fahad Sulehria

We have been monitoring the central region of M31 with the Chandra X-ray observatory for over 13 years, averaging about 1 observation per month where possible; we now have over 150 Chandra observations! Each month, we look for bright new X-ray sources; if one looks particularly promising, then we use the Hubble Space Telescope to see if we can find it in visible light. Since the center of a galaxy is chock-full of stars, we play a game of spot the difference, making two HST observations about 6 months apart. The optical light is linked to the X-rays, so that the true counterpart to the X-ray transient should be visible in the first observation, but not in the second one; we can subtract the second image from the first one, making such changes clearly visible. We did this for 12 transients last year, have recently had number 13 accepted for publication, and very recently (2013 June 2) found a brand new bright transient to follow up! By comparing the X-ray and visible light coming from these systems, we can estimate the size of their orbits (using lots of clever assumptions); this is the best opportunity we have for comparing black holes in a different galaxy to black holes in the Milky Way. So far, it looks like the M31 transients tend to have tighter orbits than the Milky black hole systems, perhaps indicating differences in evolution histories of these galaxies. 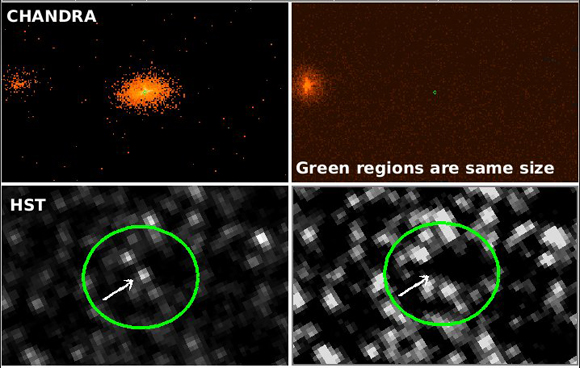 The Chandra and Hubble Space Telescope images on the left show a black hole candidate in M31 during an outburst. On the right they show the same region 6 months later, when the outburst is finished. Credit: Robin Barnard.

On top of this monitoring work, I have been making the most of this huge data set in finding black holes using a different method that I invented. There are three types of strong X-ray sources that look very similar: low-level neutron star XBs, low-level black hole XBs, and the supermassive black holes in distant galaxies called active galactic nuclei or AGN; they all exhibit characteristic "hard state" emission that result in very similar X-ray colors. Vitally, the black hole XBs can show this signature behavior at higher luminosities than neutron star XBs; therefore, if we can show that an X-ray source exhibits this signature at a luminosity that is too high for a neutron star XB, then it is going to be a black hole XB or a background AGN. We have been tracking 531 X-ray sources in these 150 Chandra observations, giving me many thousands of chances to catch a black hole XB in the act! All we need to do is weed out the distant AGN. In order to confirm a black hole, we need to identify the companion star and see how it is affected; until then, we can only formally identify black hole candidates.

First of all, we targeted bright X-ray sources associated with Andromedan globular clusters. Globular clusters (GCs) are densely packed collections of stars that are good places to find black hole XBs because a) the high stellar density increases the likelihood of making an XB, and b) it is very unlikely that you'll find an AGN at the position of the GC by coincidence. Two downsides have been the total lack of GC black hole XBs in our Galaxy, and the fact that early theory expected the BHs to be ejected from the GCs! This dearth of Galactic GC black holes is unfortunate, but doesn't mean that they do not exist in other galaxies; there are many more bright X-ray sources in M31 GCs than in our own Galactic GCs. Furthermore, recent computer modeling has shown that the variation in the properties of Galactic globular clusters is likely due to some of them losing all their black holes, while others keep quite a large fraction of them; the black holes are expected to fling each other out, but as the number of remaining black holes goes down, so does the probability of them interacting and ejecting more. We have published 11 black hole candidates associated with M31 GCs to date, with another one in the works. 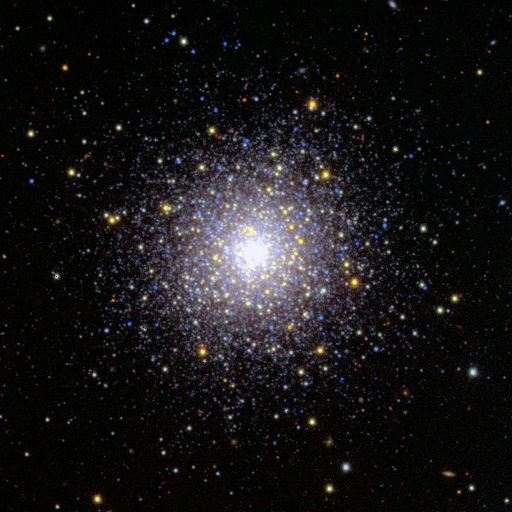 A Hubble Space Telescope image of the globular cluster M80, located in our galaxy. Credit: The Hubble Heritage Team (AURA/STScI/NASA).

Another way we can discriminate between black hole XBs and AGN is by examining their variability; XBs are far more enthusiastic and excitable than their gigantic cousins, and it has long been known that AGN change intensity much more slowly than XBs. However, until recently it was difficult to put this knowledge to use in a readily quantifiable way. Then I dug up something called structure function analysis that had been applied to X-ray observations of AGN in order to quantify their ensemble variability over a range of time-scales from a few hours to over a year! This was exactly what I needed, and I applied this structure function analysis to the 150 observations of our X-ray sources. Our pilot study of GC X-ray binaries showed that we could easily distinguish between the structure functions of XBs (containing neutron stars or black holes) and AGN; as a result, we were finally able to look for black holes outside GCs. We found that 350 out of 531 X-ray sources were likely XBs; this is a great improvement over previous works where only 50 XBs and about 50 XB candidates were identified out of nearly 2000 M31 X-ray sources. Out of these 350 XBs, we identified 26 black hole candidates; unlike those black hole candidates in globular clusters, where the companions are extremely difficult to pick out due to the tremendous crowding of stars, we have a chance of confirming these via observations of their companion stars.

We are particularly excited about 7 black hole candidates that we found within ~1000 light years of the galaxy center. Previous work revealed considerably more XBs in this region than expected; this excess is thought to be due to XBs forming when black holes or neutron stars capture a passing star, rather than evolving from a pre-existing binary system. Such "dynamical formation" is only possible when stellar densities are high, such as in GCs, and it looks like the bulge of M31 may be big enough to pull this stunt too; the central black hole and bulge of our own Galaxy are both considerably smaller than the ones in M31, meaning that we are unlikely to see any dynamically formed XBs in our own Galactic center. Stars in the bulge zip around at a considerably higher speed than stars in a globular cluster; as a result, only XBs with a tight orbit (short orbital period) and/or a black hole are expected to survive. Therefore, seeing this apparent concentration of black hole systems so close to the center provides strong support for the “dynamical formation” scenario.