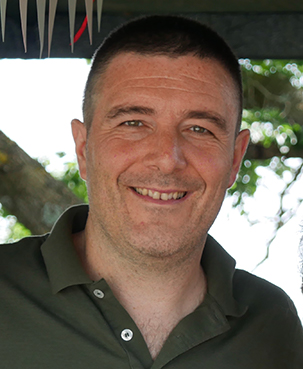 We are pleased to welcome Guido Risaliti as our guest blogger. Guido is the first author of a paper that is the subject of our latest press release. He is an astrophysicist whose main research field is the study of giant black holes in the center of galaxies. He got a Ph.D. from the University of Florence, Italy, in 2002. He then worked as a researcher at INAF - Arcetri Observatory from 2002 until 2015, and was a Research Associate at the Center for Astrophysics / Harvard and Smithsonian from 2002 to 2014. Since 2015, he has been an Associate Professor at the University of Florence.

For about 20 years I have studied the emission of quasars, the most luminous persistent sources in the Universe, powered by an “accretion disk” made of gas spiraling into a giant black hole. Quasars emit most of their radiation in the optical/ultraviolet (UV) band, through their accretion disk, and a small fraction in the X-rays, produced by a cloud of hot electrons called a “corona”. This corona needs a continuous flow of energy from the disk in order not to cool down and stop producing X-rays.

We do not know much about this energy exchange: a self-consistent model linking these two components has not been found yet. However, we have observed an interesting relation: the X-ray fraction of the total emission of radiation by quasars decreases with its luminosity. For example, if observing two quasars, we find that the first one is ten times more UV luminous than the second one, it will be only four times more luminous in X-rays.

When I started studying this relation more than ten years ago, it was even disputed whether it was real at all, or the consequence of selection effects, where bias in the selection of objects leads to incorrect conclusions. Indeed, its dispersion — how large the scatter is around the average — was large, with only a few hundred quasars observed in both UV and X-rays.

Nevertheless, I found this relation very interesting, and I started dreaming of using the ratio between the X-ray and UV emission to estimate the luminosity of quasars, turning them into “standard candles”. The idea was very simple: from the luminosity I could obtain the distance. And knowing both distance and redshift (the shifting of light towards redder wavelengths from objects that are moving away from us, here because of the expansion of the Universe), I could build a “Hubble diagram” of quasars!

I said “dreaming” above because the chance of success seemed scant. The method was easy, but the required precision for meaningful cosmological tests appeared impossible to reach. The distances of supernovas are estimated with a few percent error, while the errors for quasars are about a hundred times larger! Nonetheless, I decided to give it a try. Several studies on the relation were already published, containing a few to hundreds of sources each. I thought that, putting everything together, the large number could compensate for the high uncertainty.

This is where the real work started, about four years ago. I was joined in this project by Dr. Elisabeta Lusso, who had led one of the latest studies on the relation and was, therefore, one of the main experts in the field. All the subsequent work has been made by the two of us.

The first step has been half a success and half a disappointment: the success consisted of building a Hubble diagram up to redshift about 6, which matches up to about 1 billion years after the Big Bang. We could not improve the cosmological constraints or test any new model, but we were able to show for the first time that the high-redshift (early Universe) expansion seemed to be consistent with the expectations. We published these results in 2015. The disappointment came from the realization that several UV and X-ray flux measurements were not reliable, mainly because of absorption by gas and dust, and of systematic selection effects in the sample.

The turning point in this story came shortly after, when we realized that what at first disappointed us was instead a great opportunity: the contaminants and systematic effects were the main reason for the high dispersion of the relation. Cleaning the sample from these issues greatly improved the precision in the distance estimates. There was hope to use quasars as reliable cosmological probes!

The next key step consisted of improving the statistics by cross-correlating several UV and X-ray catalogues. This provided several thousand new quasars, an improvement of more than one order of magnitude! The cleaning procedure has been the most difficult part of the work. Telling others about the final physical results of a big project is the pleasurable part — the day-by-day work is indeed less exciting. Systematic effects are the real enemies in this kind of work and being sure to have removed any possible “suspicious” source from the sample has been the toughest part of our job.

The final chapter of this story is the inclusion of two groups of the most distant quasars, fundamental to explore the expansion of the Universe at remote times. The first group was obtained from a large observational program with XMM-Newton of 30 quasars at redshift about 3 (for an age of the Universe of about 2.2 billion years). For the second one we dug through the Chandra archive for suitable high distance sources, finding about 40 quasars at z > 4 (for an age of the Universe less than 1.6 billion years).

Our final Hubble Diagram gave us completely unexpected results: while our measurement of the expansion of the Universe was in agreement with supernovae in the common distance range (from an age of 4.3 billion years up to the present day), the inclusion of more distant quasars shows a strong deviation from the expectations of the standard cosmological model! If we explain this deviation through a dark energy component, we find that its density must increase with time. This is only one possible interpretation, but very interesting indeed as this would also explain the current tension between the values of the Hubble constant obtained with different methods.

We are very proud of our current Hubble diagram of quasars, but the best has yet to come. We hope we have just opened a new branch of observational cosmology, with the possibility of testing alternative cosmological models. Our next big step will be the analysis of serendipitous Chandra observations from the new Chandra catalog of X-ray sources. This will add several thousand new quasars, which will further refine our measurements … Stay tuned!