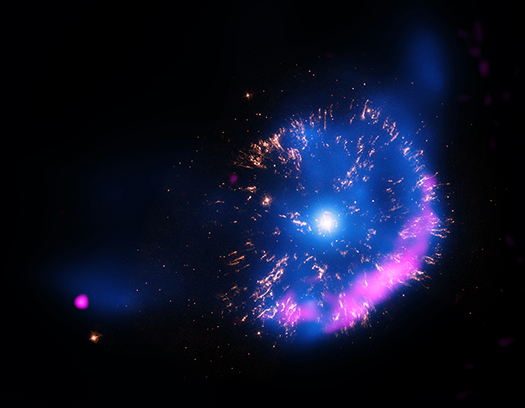 In Hollywood blockbusters, explosions are often among the stars of the show. In space, explosions of actual stars are a focus for scientists who hope to better understand their births, lives, and deaths and how they interact with their surroundings.

Using NASA's Chandra X-ray Observatory, astronomers have studied one particular explosion that may provide clues to the dynamics of other, much larger stellar eruptions.

A team of researchers pointed the telescope at GK Persei, an object that became a sensation in the astronomical world in 1901 when it suddenly appeared as one of the brightest stars in the sky for a few days, before gradually fading away in brightness. Today, astronomers cite GK Persei as an example of a "classical nova," an outburst produced by a thermonuclear explosion on the surface of a white dwarf star, the dense remnant of a Sun-like star.

A nova can occur if the strong gravity of a white dwarf pulls material from its orbiting companion star. If enough material, mostly in the form of hydrogen gas, accumulates on the surface of the white dwarf, nuclear fusion reactions can occur and intensify, culminating into a cosmic-sized hydrogen bomb blast. The outer layers of the white dwarf are blown away, producing a nova outburst that can be observed for a period of months to years as the material expands into space.

Classical novas can be considered to be "miniature" versions of supernova explosions. Supernovas signal the destruction of an entire star and can be so bright that they outshine the whole galaxy where they are found. Supernovas are extremely important for cosmic ecology because they inject huge amounts of energy into the interstellar gas, and are responsible for dispersing elements such as iron, calcium and oxygen into space where they may be incorporated into future generations of stars and planets.

Although the remnants of supernovas are much more massive and energetic than classical novas, some of the fundamental physics is the same. Both involve an explosion and creation of a shock wave that travels at supersonic speeds through the surrounding gas.

The more modest energies and masses associated with classical novas means that the remnants evolve more quickly. This, plus the much higher frequency of their occurrence compared to supenovas, makes classical novas important targets for studying cosmic explosions.

Today, astronomers cite GK Persei as an example of a "classical nova," an outburst produced by a thermonuclear explosion on the surface of a white dwarf star, the dense remnant of a Sun-like star.