Hide and Seek: Tracking Down the Invisible Filaments 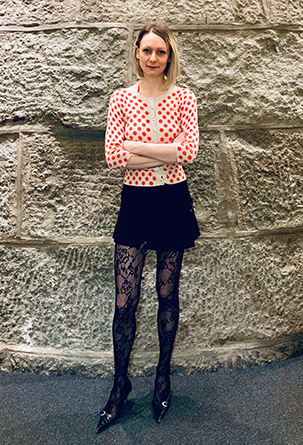 We welcome Orsolya Kovács, a third-year PhD student at the Eötvös Loránd University, Hungary where she obtained her MSc degree in astronomy, as our guest blogger. Currently, she is a pre-doctoral fellow at the Smithsonian Astrophysical Observatory, and is the first author on a recent paper on the WHIM featured in our latest press release.

I was working on a totally different subject before I started the missing baryon project with a small group of scientists at the Smithsonian Astrophysical Observatory (SAO) about two years ago. Before I came to the United States as a Ph.D. student, I was involved in analyzing optical data of variable stars observed at the beautiful Piszkéstető Station in the Mátra Mountains, Hungary. In my master’s thesis, I focused on the variable stars of an extremely old open cluster in the Milky Way, and at that time, I also got the chance to gain some observing skills from my Hungarian supervisor.

So the very beginning of my astronomy career was all about optical astronomy. But before getting really into optical astronomy and mountain life, I decided to interrupt this idyllic period, and find some new challenges: I wanted to spend part of my Ph.D. years learning X-ray astrophysics. With this in my mind, I applied to the SAO’s pre-doctoral program, and a few months later I arrived in Massachusetts.

Shortly after introducing me to the basics of X-ray astronomy, Ákos Bogdán at SAO proposed a crazy idea about how to observe the ‘invisible’, i.e. the missing part of the ordinary (baryonic) matter that could possibly solve the long-standing missing baryon problem. The missing baryon problem is related to the mismatch between the observed and theoretically predicted amount of matter.

Since theoretical predictions come from observations of the high-redshift, or early Universe, we can simply state that in the past, a hundred percent of the matter was there, but now, part of it is hiding somewhere. There are over 10^12 galaxies in the Universe, but the stars and gas in all these galaxies only account for a small fraction of all the ordinary matter. Simulations predict that during the evolution of the Universe, one third of the baryons (the missing part) gathered into filamentary structures. These structures are one of the biggest building blocks of the Universe, connecting galaxies and even clusters of galaxies with each other. Because they fill a huge volume, their density is extremely low, and thus, they are also exceedingly dim. These properties make them the perfect hiding place for the missing matter.

We were aware that it was a high-risk, high-reward project, because these filaments and the missing baryons should definitely be visible with future X-ray missions, but may be at the edge of detectability with current telescopes. Many previous studies attempted to explore these invisible filaments, but they could not deliver definite detections. However, since astronomy is often about tricky solutions, we swung into action and found a tricky technique to implement. The basic idea of our method was to look for filaments along the path to a quasar, a bright source of X-rays powered by a rapidly growing supermassive black hole. Our chosen quasar, H1821+643, is located about 3.4 billion light years from Earth.

We then co-added a bunch of Chandra X-ray observations of H1821+643 in the hope that these invisible filaments would become visible. This way we can improve the detectability of filaments. At first glance, the technical part of our ‘stacking’ method seemed to be pretty straightforward and should have easily been accomplished. However, our path to success was paved with a number of exciting riddles that presented our entire team — which consisted of several seasoned astronomers — with new and unexpected challenges. Not to mention the selection of the X-ray observations containing the invisible filaments, or the interpretation of the stacked signal we’ve detected.

We spent almost a year with the fine-tuning of our analysis. When we looked at the results, we realized that we found a puzzle piece that fits into the big picture predicted by simulations. This was a great relief for the entire team and probably for the whole astronomy community. Now we are certain in two things: some fraction of the missing matter is in the filaments, and taking risks can be very rewarding. Thanks H1821+643 for being a good quasar and illuminating those shadowy filaments in your sightline!

Category:
Quasars & Active Galaxies
Cosmology/Deep Field
Subcategory:
Women in the High Energy Universe
Disclaimer: This service is provided as a free forum for registered users. Users' comments do not reflect the views of the Chandra X-ray Center and the Harvard-Smithsonian Center for Astrophysics.
Please note this is a moderated blog. No pornography, spam, profanity or discriminatory remarks are allowed. No personal attacks are allowed. Users should stay on topic to keep it relevant for the readers.
Read the privacy statement