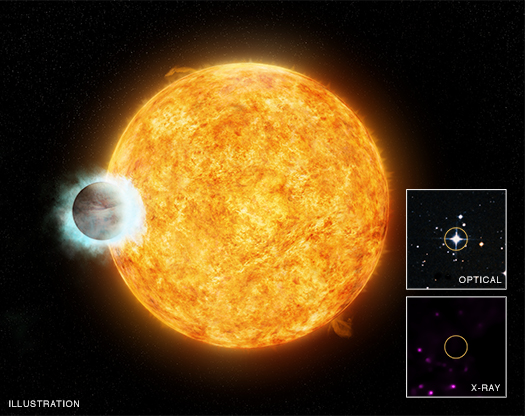 A new study using data from NASA's Chandra X-ray Observatory has shown that a planet is making the star that it orbits act much older than it actually is, as explained in our latest press release. The artist's illustration featured in the main part of this graphic depicts the star, WASP-18, and its planet, WASP-18b.

WASP-18b is a "hot Jupiter," a giant exoplanet that orbits very close to its star, located about 330 light years from Earth. Specifically, the mass of WASP-18b is estimated to be about ten times that of Jupiter, yet it orbits its star about once every 23 hours. By comparison, it takes Jupiter about 12 years to complete one trip around the Sun from its great distance.

The new Chandra data of the WASP-18 system show that this huge planet is so close to its star that it may be causing a dampening of the star's magnetic field. As stars age, their X-ray and magnetic activity decreases. Astronomers determined that WASP-18 is only between 500 million and 2 billion years old, a relatively young age for a star. Given this age, astronomers expect that WASP-18 would be giving off copious amounts of X-rays.

Surprisingly, the long Chandra observations reveal no X-rays being emitted from WASP-18, as seen in the lower inset box. The same field-of-view in the upper inset box shows that in optical light WASP-18 is a bright source. Using established relations between the magnetic activity and X-ray emission of stars and their age, the researchers concluded that WASP-18 is about 100 times less active than it should be at its age.

The low amount of magnetic activity from WASP-18 is shown in the artist's illustration by the lack of sunspots and strong flares on the surface of the star. The weak X-ray emission from the star has relatively little effect on the outer atmosphere of the nearby planet, giving it a symmetrical appearance. By contrast, much stronger X-rays from the star CoRoT-2a are eroding the atmosphere of its nearby planet, producing a tail-like appearance.