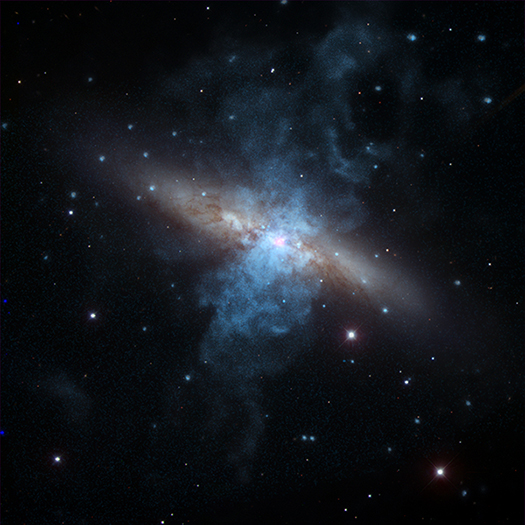 An Ultraluminous X-ray Source (ULX) that astronomers had thought was a black hole is really the brightest pulsar ever recorded. ULXs are objects that produce more X-rays than most "normal" X-ray binary systems, in which a star is orbiting a neutron star or a stellar-mass black hole. Black holes in these X-ray binary systems generally weigh about five to thirty times the mass of the sun.

Astronomers used NASA's NuSTAR (Nuclear Spectroscopic Telescope Array) and Chandra X-ray Observatory to study two ULXs in the center of M82, a galaxy located just over 11 million light years from Earth. This composite image shows X-rays from NuSTAR (purple) and Chandra (blue) that have been combined with optical data from the NOAO 2.1 meter telescope (gold). The extended X-ray emission is unrelated to the two ULXs.

The new X-ray data provide a critical clue to the nature of one of the ULXs in M82. Using NuSTAR, scientists have discovered regular variations, or "pulsations," in the object known as M82X-2. This object pulses once on average every 1.37 seconds, and pulsations change in a regular pattern with a period of 2.5 days.

These types of pulsations are not seen with black holes. Rather, they are the signatures of so-called pulsars, rapidly rotating neutron stars. The apparent shifts in the pulsation period are due to the motion of the star in its orbit. Assuming that the pulsar weighs 1.4 times the mass of the Sun (the common size of a pulsar or neutron star), the data imply that the companion star's mass is at least 5.2 times the mass of the Sun.