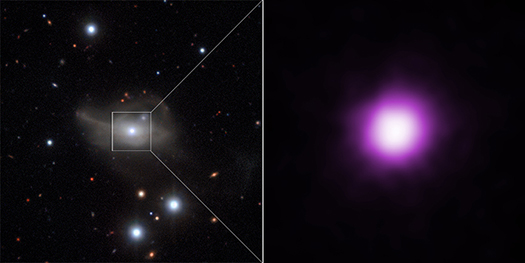 Astronomers may have solved the mystery of the peculiar volatile behavior of a supermassive black hole at the center of a galaxy. Combined data from NASA's Chandra X-ray Observatory and other observatories suggest that the black hole is no longer being fed enough fuel to make its surroundings shine brightly.

Many galaxies have an extremely bright core, or nucleus, powered by material falling toward a supermassive black hole. These so-called "active galactic nuclei" or AGN, are some of the brightest objects in the Universe.

Astronomers classify AGN into two main types based on the properties of the light they emit. One type of AGN tends to be brighter than the other. The brightness is generally thought to depend on either or both of two factors: the AGN could be obscured by surrounding gas and dust, or it could be intrinsically dim because the rate of feeding of the supermassive black hole is low.

Some AGN have been observed to change once between these two types over the course of only 10 years, a blink of an eye in astronomical terms. However, the AGN associated with the galaxy Markarian 1018 stands out by changing type twice, from a faint to a bright AGN in the 1980s and then changing back to a faint AGN within the last five years. A handful of AGN have been observed to make this full-cycle change, but never before has one been studied in such detail. During the second change in type the Markarian 1018 AGN became eight times fainter in X-rays between 2010 and 2016.

After discovering the AGN's fickle nature during a survey project using ESO's Very Large Telescope (VLT), astronomers requested and received time to observe it with both NASA's Chandra X-ray Observatory and Hubble Space Telescope. The accompanying graphic shows the AGN in optical light from the VLT (left) with a Chandra image of the galaxy's central region in X-rays showing the point source for the AGN (right).