There are some exciting, yet different, Chandra-related events happening at the American Astronomical Society (http://aas.org/) meeting in Long Beach, CA today. First, there was a press conference this morning to announce new results on Cassiopeia A that bring this supernova remnant "to life". One result shows how Cas A has changed from 2000 â€“ just after Chandraâ€™s launch â€“ through until late 2007. This is the first time scientists have been able to watch as a supernova remnant changes like this over time. Another group took data from Chandra, Spitzer, and other telescopes and constructed a 3-D model of Cas A. This is a real model based on real data and allows you see a star from the inside out after it exploded (not your typical YouTube experience). If you are interested in the details, take a look at the press release and captions that go along with both movies. Or, if you just want to see some cool movies, go anyway. 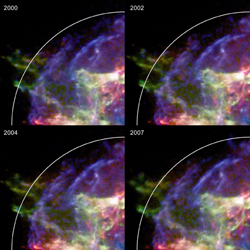 Cas A in Motion: Video and Caption 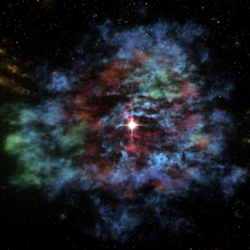 Cas A in 3D: Video and Caption

The results from this press conference, we think, tie in almost perfectly with something thatâ€™s planned for later tonight, that is, the US launch of the International Year of Astronomy (IYA2009). As you may have heard, this year-long event is designed to promote science and science literacy through astronomy in honor of the 400th anniversary of Galileoâ€™s telescope. We think the new Cas A results tie in perfectly with this. After all, these new results take what Galileo started with â€“ a flat, unaided view in optical light â€“ and propel our understanding so far beyond that. On a very basic level, the work announced today is based on wavelengths that are invisible to the human eye. Some of these wavelengths â€“ like X-rays â€“ werenâ€™t even detectable from space until a few decades ago. Now, we have the ability to observe the cosmos over time and space. Every year, every conference, every paper published in astronomy adds to our understanding of the Universe we inhabit. And recognizing how progress in astronomy and science marches on might be the one of best ways to celebrate IYA 2009.