Q and A of the Day: Where The Supernovas Are

Q:
Where in a galaxy would you expect to find Type I and Type II supernovas?

A:
The two basic types of supernovas are Type Ia and Type II. Other types, such as Types Ib and Ic, are unusual supernovas that have most of the properties of type II supernovas. 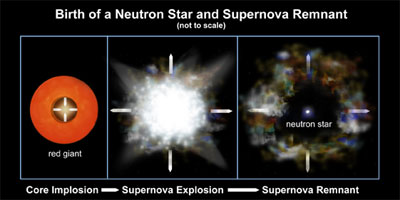 Type Ia supernovas are believed to be triggered by a large transfer of mass from a companion star onto a white dwarf that pushes the white dwarf over the Chandrasekhar limit. A thermonuclear explosion follows, blowing the entire star apart, and sending material rich in iron and other products of the explosion rushing out into space. Since a white dwarf is involved, Type Ia supernovas are expected to be found among old star systems, such as globular clusters, the central bulges of galaxies and elliptical galaxies.

Type II supernovas are thought to result from the collapse of a massive star (ten or more times as massive as the Sun) that has reached the end of the red giant stage of evolution, and formed an iron core. The core collapses under the weight of the outer layers of the star. A neutron star is formed, lots of neutrinos and other radiation is emitted, and everything except the neutron star is blown away. Since massive stars are involved, Type II supernovas are found in the spiral arms and other star-forming regions of spiral and disk galaxies, which have lots of gas and dust for the formation of new stars.

Category:
Q&A of the Day
Disclaimer: This service is provided as a free forum for registered users. Users' comments do not reflect the views of the Chandra X-ray Center and the Harvard-Smithsonian Center for Astrophysics.
Please note this is a moderated blog. No pornography, spam, profanity or discriminatory remarks are allowed. No personal attacks are allowed. Users should stay on topic to keep it relevant for the readers.
Read the privacy statement