Jonathan Taylor, a Senior Lecturer in Creative Writing at De Montfort University in the UK, wrote a poem about the cosmic 'ghost' lurking around a distant supermassive black hole. His poem also appears in the literary magazine Acumen, issue 67, http://www.acumen-poetry.co.uk/. Jonathan is not only a poet, but a memoirist and novelist. 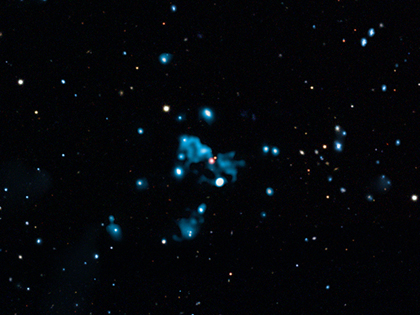 Telescoped, the universe is a vast memory,
an over-long school-lesson in cosmic history,
background radiation droning on and on
from 300,000 years after the big bang,
remembering anything big enough (not us);

black-holes are hangover-haunted by X-ray fuzz,
groaning about binges on long-ago nights,
which climaxed in billions of star-bursts of vomit,
heaving energy across light-years of galaxy,
as if these mouths had consumed something too spicy;

supernovae remember how they first happened,
old men reminiscing in star-remnants’ patterns
about halcyon days, when they were suns too,
until thermonuclear dementia tore through
their molten synapses

– and we know that,
when any-sun forgets so much is lost, past,
local light-years of knowledge, years in the million,
till nothing is left except a history of billions.

Category:
Poetry
Disclaimer: This service is provided as a free forum for registered users. Users' comments do not reflect the views of the Chandra X-ray Center and the Harvard-Smithsonian Center for Astrophysics.
Please note this is a moderated blog. No pornography, spam, profanity or discriminatory remarks are allowed. No personal attacks are allowed. Users should stay on topic to keep it relevant for the readers.
Read the privacy statement