Correction: After this paper (Treister et al. 2011) was published and publicized a problem was discovered with the background subtraction used. Analysis by several groups, including the Treister et al. team, plus Willott (2011) and Cowie et al. (2012), shows that a significant detection of AGN (growing black holes) in the early universe can no longer be claimed.

Editor's Note: Honest errors such as this are part of the scientific process, especially on the frontiers of discovery. To quote Nobel laureate Frank Wilczek, "If you don't make mistakes, you're not working on hard enough problems. And that's a big mistake." 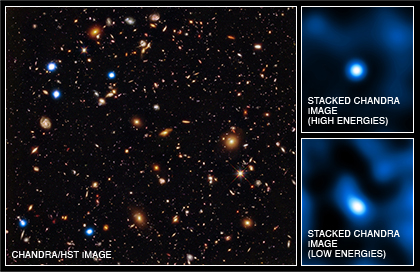 This composite image from NASA's Chandra X-ray Observatory and Hubble Space Telescope (HST) combines the deepest X-ray, optical and infrared views of the sky. Using these images, astronomers have obtained the first direct evidence that black holes are common in the early Universe and shown that very young black holes grew more aggressively than previously thought.

Astronomers obtained what is known as the Chandra Deep Field South (CDFS) by pointing the telescope at the same patch of sky for over six weeks of time. The composite image shows a small section of the CDFS, where the Chandra sources are blue, the optical HST data are shown in green and blue, and the infrared data from Hubble are in red and green.

The new Chandra data allowed astronomers to search for black holes in 200 distant galaxies, from when the Universe was between about 800 million and 950 million years old. These distant galaxies were detected using the HST data and the positions of a subset of them are marked with the yellow circles (roll your mouse over the image above).

The rest of the 200 galaxies were found in other deep HST observations located either elsewhere in the CDFS or the Chandra Deep Field North, a second ultra- deep Chandra field in a different part of the sky.