A Pulsar and its Mysterious Tail 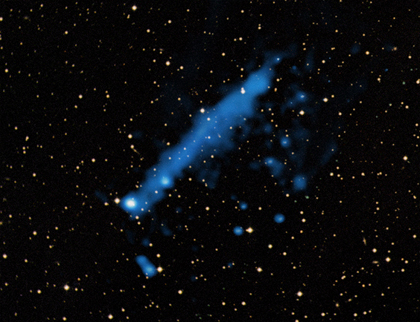 A spinning neutron star is tied to a mysterious tail - or so it seems. Astronomers using NASA's Chandra X-ray Observatory have found that this pulsar, known as PSR J0357+3205 (or PSR J0357 for short), apparently has a long, X-ray bright tail streaming away from it.

This composite image shows Chandra data in blue and Digitized Sky Survey optical data in yellow. The two bright sources lying near the lower left end of the tail are both thought to be unrelated background objects located outside our galaxy.

PSR J0357 was originally discovered by the Fermi Gamma Ray Space Telescope in 2009. Astronomers calculate that the pulsar lies about 1,600 light years from Earth and is about half a million years old, which makes it roughly middle-aged for this type of object.

If the tail is at the same distance as the pulsar then it stretches for 4.2 light years in length. This would make it one of the the longest X-ray tails ever associated with a so-called "rotation- powered" pulsar, a class of pulsar that get its power from the energy lost as the rotation of the pulsar slows down. (Other types of pulsars include those driven by strong magnetic fields and still others that are powered by material falling onto the neutron star.)

The Chandra data indicate that the X-ray tail may be produced by emission from energetic particles in a pulsar wind, with the particles produced by the pulsar spiraling around magnetic field lines. Other X- ray tails around pulsars have been interpreted as bow-shocks generated by the supersonic motion of pulsars through space, with the wind trailing behind as its particles are swept back by the pulsar's interaction with the interstellar gas it encounters.