Ever since we publicized the "deepest note in the Universe" in 2003, I have admired outreach efforts that combine music and astronomy. These efforts have continued this summer and fall with a program by Don Lubowich, from Hofstra University, who has organised astronomy exhibits to be installed at a large number of music festivals and events. My small role in this program involved displaying images from the "From Earth to the Universe (FETTU)" exhibit on the first day of the Newport Folk Festival at the end of July, added to Don's astronomy banners which also included material from FETTU. 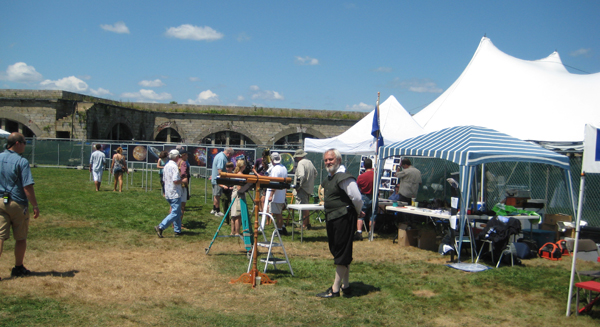 Since it was a cloudless day, the star - and villain - of the show turned out to be the Sun. Amateur astronomers from Rhode Island had several telescopes set up to observe our parent star, including one with a special filter that showed a beautiful prominence on the limb of the Sun. The telescopes attracted a steady flow of people. The eye-catching FETTU images were admired, but thanks to a striking lack of shade near our location and the warm weather, the posters and banners in the exhibit ended up serving a different role from the one that was planned - providing relief from the Sun to some of the festival goers. 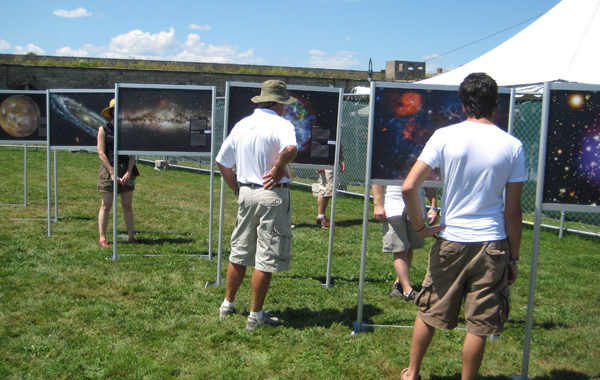 Also attending the astronomy exhibit was a man playing the role of Galileo, complete with a costume and a model of Galileo's telescope. While he was taking a break from the Sun I asked him how people reacted to his costume. He said some people love it, while others try very hard to make him break character. I accidentally tested him out on this about an hour later in the day. I saw him standing by himself with his telescope, maybe ten feet from where our earlier conversation had taken place. I looked through his telescope and - not knowing he was back in character - asked him if it was an authentic representation of Galileo's first telescope. He gave me a look and then replied in his light Italian accent "this is MY telescope!" He patiently kept this going over many hours in the heat. This was surely gave one of the best performances of the day. Bravo, Galileo!

This wasn't the only minor culture clash of the day. While I enjoy music I don't follow it closely like I do with sports, for example. So, I wasn't familiar with most of the performers at the Festival. I noticed that one of the bands playing next to the exhibit was especially popular and found out they were called "Delta Spirit". When I asked one of the amateur astronomers if he had heard of this band, he replied "no, and they sound like an airline". But, even though they weren't familiar to me, I enjoyed Delta Spirit's music, along with the other performers. And, clearly some of the music lovers enjoyed the astronomy exhibit even though it wasn't the main attraction at the festival.