An Interview with Will Dawson 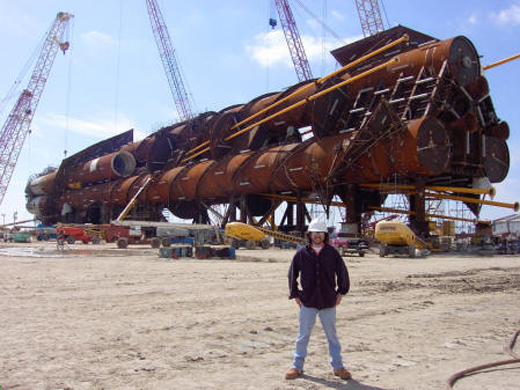 Will Dawson standing next to the Red Hawk cell spar (currently installed in the Gulf of Mexico).

Astronomy can generate a large amount of attention from the public, but the number of working astronomers is smaller than the number of researchers in many other academic fields. So, when people get over their surprise at meeting a real astronomer, they often ask "How did you end up working in this field?". There are many different answers, but an interesting one is provided here by Will Dawson from the University of California, Davis, who kindly explains his career change from engineering to astronomy. We were very satisfied to hear that part of his motivation for this big change came from the publicity generated by the Bullet Cluster in 2006.

Will is the first author of a recent paper describing the discovery of the Musket Ball Cluster.

What field did you work in before astronomy?

After graduating with my bachelor of science degree in Maritime Systems Engineering from Texas A&M at Galveston in 2002, I went to work in the offshore engineering industry at Technip. During my four years with Technip I was primarily involved with the design and analysis of Spars, which are floating offshore oil production platforms (essentially stiffened steel cylinders roughly 90 feet in diameter, 550 feet long and 25,000 tons).

What inspired you to change fields?

Ironically it was working directly with some of the giants of the industry (Ed Horton, Lyle Finn, Jim Maher and R.J. Brown) that the seed of my current endeavor was planted. I noted one common trait that separated these men from all the other highly skilled engineers; a true passion for their profession. Soon after, I realized that I did not share their passion.

Following this revelation I set out to determine what my passion was. For two years I worked on this problem. In true engineer fashion I was quite methodical, at one point creating an array of 16 career possibilities versus 22 desires each career might meet. I also wanted to avoid the "grass is always greener" phenomenon and so I not only thought about what careers I might be passionate about but what I could change about my engineering job to make it more interesting.

A large part of the reason it took so long to make change fields is that I was doing quite well at Technip. I had won company awards, was managing a team of engineers on a project, and had been offered a nice position in the R&D department. I still remember when I told my department manager my plans to leave the field. He flat out told me I was crazy. I also couldn't flippantly change fields because it meant a huge change for my wife Kerri who was also an engineer at Technip. She was arguably doing even better than me and seemed destined for upper level management. I actually gave her the "go no-go" decision on making the change, so without her support I wouldn't be a physicist today.