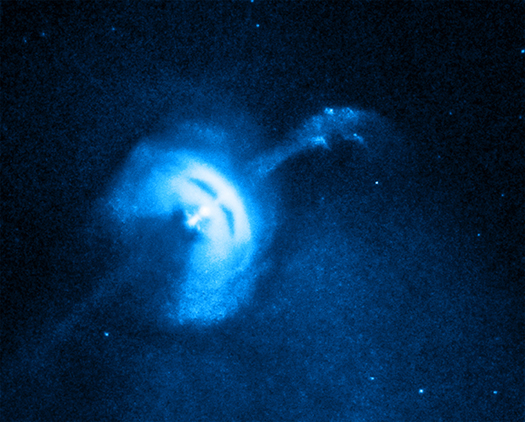 This movie from NASA's Chandra X-ray Observatory shows a fast moving jet of particles produced by a rapidly rotating neutron star , and may provide new insight into the nature of some of the densest matter in the universe.

The star of this movie is the Vela pulsar, a neutron star that was formed when a massive star collapsed. The Vela pulsar is about 1,000 light years from Earth, spans about 12 miles in diameter, and makes over 11 complete rotations every second, faster than a helicopter rotor. As the pulsar whips around, it spews out a jet of charged particles that race out along the pulsar's rotation axis at about 70% of the speed of light. In this still image from the movie, the location of the pulsar and the 0.7-light-year-long jet are labeled.

The Chandra data shown in the movie, containing 8 images obtained between June and September 2010, suggest that the pulsar may be slowly wobbling, or precessing, as it spins. The shape and the motion of the Vela jet look strikingly like a rotating helix, a shape that is naturally explained by precession, as shown in this animation. If the evidence for precession of the Vela pulsar is confirmed, it would be the first time that a jet from a neutron star has been found to be precessing in this way.

One possible cause of precession for a spinning neutron star is that it has become slightly distorted and is no longer a perfect sphere. This distortion might be caused by the combined action of the fast rotation and "glitches", sudden increases of the pulsar's rotational speed due to the interaction of the superfluid core of the neutron star with its crust.

A paper describing these results will be published in The Astrophysical Journal on January 10, 2013.