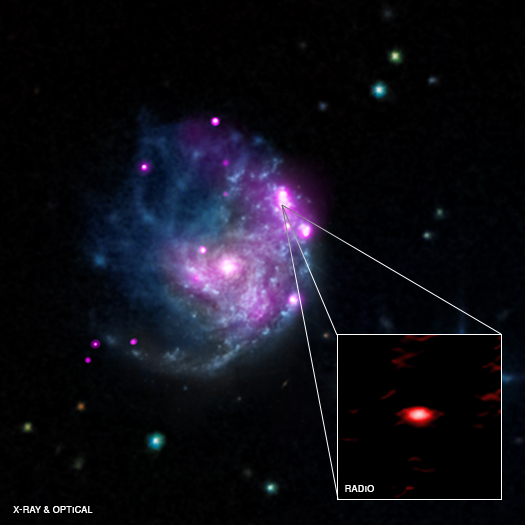 A newly discovered object in the galaxy NGC 2276 may prove to be an important black hole that helps fill in the evolutionary story of these exotic objects, as described in our latest press release. The main image in this graphic contains a composite image of NGC 2766 that includes X-rays from NASA's Chandra X-ray Observatory (pink) combined with optical data from the Hubble Space Telescope and the Digitized Sky Survey (red, green and blue). The inset is a zoom into the interesting source that lies in one of the galaxy's spiral arms. This object, called NGC 2276-3c, is seen in radio waves (red) in observations from the European Very Long Baseline Interferometry Network, or EVN.

IMBHs are interesting to astronomers because they may be the seeds that eventually evolve into supermassive black holes. They also may be strongly influencing their environment. This latest result on NGC 2276-3c suggests that it may be suppressing the formation of new stars around it. The EVN radio data reveal an inner jet that extends about 6 light years from NGC 2276-3c. Additional observations by the NSF's Karl Jansky Very Large Array (VLA) show large-scale radio emission extending out to over 2,000 light years away from the source.

A region along the jet extending to about 1,000 light years away from NGC 2766-3c is devoid of young stars. This might provide evidence that the jet has cleared out a cavity in the gas, preventing new stars from forming there. The VLA data also reveal a large population of stars at the edge of the radio emission from the jet. This enhanced star formation could take place either when the material swept out by the jet collides with dust and gas in between the stars in NGC 2276, or when triggered by the merger of NGC 2276 with a dwarf galaxy.