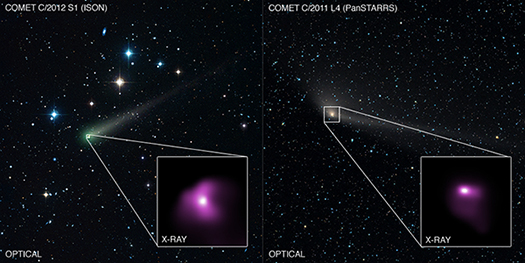 For millennia, people on Earth have watched comets in the sky. Many ancient cultures saw comets as the harbingers of doom, but today scientists know that comets are really frozen balls of dust, gas, and rock and may have been responsible for delivering water to planets like Earth billions of years ago.

While comets are inherently interesting, they can also provide information about other aspects of our Solar System. More specifically, comets can be used as laboratories to study the behavior of the stream of particles flowing away from the Sun, known as the solar wind.

Chandra observed these two comets in 2013 when both were relatively close to Earth, about 90 million and 130 million miles for Comets ISON and PanSTARRS respectively. These comets arrived in the inner Solar System after a long journey from the Oort cloud, an enormous cloud of icy bodies that extends far beyond Pluto's orbit.

The graphics show the two comets in optical images taken by an astrophotographer, Damian Peach, from the ground during the comets' close approach to the sun that have been combined with data from the Digitized Sky Survey to give a larger field of view. (The greenish hue of Comet ISON is attributed to particular gases such as cyanogen, a gas containing carbon and nitrogen, escaping from the comet's nucleus.)

The insets show the X-rays detected by Chandra from each comet. The different shapes of the X-ray emission (purple) from the two comets indicate differences in the solar wind at the times of observation and the atmospheres of each comet. Comet ISON, on one hand, shows a well-developed, parabolic shape, which indicates that the comet had a dense gaseous atmosphere. On the other hand, Comet PanSTARRS has a more diffuse X-ray haze, revealing an atmosphere with less gas and more dust.