Chandra Operations Resume After Cause of Safe Mode Identified 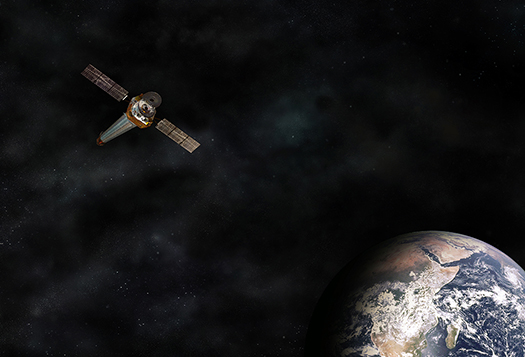 At approximately 9:55 a.m. EDT on October 10, 2018, NASA’s Chandra X-ray Observatory entered Safe Mode, where the telescope’s instruments are put into a safe configuration, critical hardware is swapped to back-up units, the spacecraft points so that the solar panels get maximum sunlight, and the mirrors point away from the Sun. All systems functioned as expected and the scientific instruments are safe.

The cause of Chandra's safe mode on October 10 has been researched and the Operations team has successfully returned the spacecraft to its normal pointing mode. The safe mode was caused by a glitch in one of Chandra's gyroscopes resulting in a 3-second period of bad data that in turn led the on-board computer to calculate an incorrect value for the spacecraft momentum. The erroneous momentum indication then triggered the safe mode. The team has completed plans to switch gyroscopes and place the gyroscope that experienced the glitch in reserve. Once configured with a series of pre-tested flight software patches, the team will return Chandra to science operations which are expected to commence next week.

Below are some questions and answers with additional technical detail, incorporating the latest information as of Monday October 15th, 2018.

1. Can you describe the “glitch” and what triggered the safe mode?

Gyros are used to measure the rate of change in spacecraft pointing. One of the two gyros that Chandra was using at the time of the glitch briefly reported an unexpected rate; i.e., the indication that Chandra was moving faster than expected. The other gyro, and data from the star tracker, confirm that this reported rate was in error. Chandra’s on-board computer, which uses gyro rate data to monitor for unexpected changes in angular momentum in order to protect Chandra from thruster problems or sensor failures, calculated a momentum change that exceeded acceptable limits and initiated a transition to safe mode.

Gyroscopes provide orientation information. Chandra's gyros are designed to produce an electrical pulse whenever Chandra's pointing direction changes by a small amount. Beginning with a known pointing direction and adding up the pulses tells the satellite's computers where it is pointed. Much of the time, as when Chandra is collecting science data, we have position information from both the gyros and from the Aspect Camera Assembly (the on-board star tracking system). At other times, such as when moving from one science target to the next, Chandra is changing its pointing direction too rapidly to use the star tracker and the aspect control system relies principally on the gyros. Gyros are essential for Chandra's operations as a space-based observatory.

3. Has this glitch in the gyro happened before?

A glitch of this size has not been observed on Chandra’s gyros before. Part of the follow-up actions from this event will be to review past data for more subtle instances of this behavior.

4. How many gyros does Chandra have and how many does it need to operate as normal?

Chandra has two Inertial Reference Units (IRUs). Each IRU has two gyros, for a total of four gyros. With the current on-board software, Chandra can conduct normal mission operations with any two of the four gyros. Some progress has been made towards a one-gyro operating mode, in case this is ever needed, but further development and test of that mode is required before it would be used operationally.

5. Does this constitute a failure of the gyro?

No. IRU-2, Gyro-2 has not failed. Data immediately before the safe mode transition indicate that the glitch resolved within approximately 3 seconds. IRU-2 has been powered back on and is operating acceptably. We will monitor its performance carefully over the coming days..

6. What is a "mixed-IRU" configuration and does it allow for normal operation?

The plan is to now use a "mixed-IRU" configuration, which means that Chandra will use one gyro from each of the IRUs. The system was designed to allow this type of “cross-strapping” and Chandra can operate nominally in this mode. The procedures and on-board software changes required to switch to such a configuration were developed and fully tested years ago. The primary drawback to this mixed configuration is that it requires both IRUs to be powered, which generates more heat in that region of the spacecraft. We expect the change to be manageable, but will monitor it closely.

7. What are the similarities and differences between Chandra's and HST's gyros?

On both Chandra and HST, gyros have an essential role in controlling and measuring the pointing direction of the observatory. Chandra carries four gyroscopes, packaged in pairs in two Inertial Reference Units and arranged so that any two of the four gyros can be used to orient Chandra (and Chandra could be operated in single-gyro mode). HST carries six gyros, packaged in pairs in three Rate Sensor Units. Although HST can operate with only two gyros or even one, three are needed for optimal capability. HST’s and Chandra’s gyros have different manufacturers and, because of the purposes and designs of the missions, accuracy requirements are more stringent for HST’s gyros than for Chandra’s.

8. What are the next steps and timeline for Chandra?

Chandra was recovered from safe mode on 2018 Oct. 12 (Friday) and the Pointing Control and Aspect Determination (PCAD) system restored to its normal state, in which it uses star data from the Aspect Camera for attitude control. Chandra was maneuvered to a cooling attitude at a solar pitch angle near 135 degrees. The next steps will be the implementation of the “mixed IRU” configuration and resumption of science operations. The team is proceeding conservatively and, although a precise estimate for resuming science operations is not possible, we anticipate that science will recommence within the next week.

Category:
Q&A of the Day
Disclaimer: This service is provided as a free forum for registered users. Users' comments do not reflect the views of the Chandra X-ray Center and the Harvard-Smithsonian Center for Astrophysics.
Please note this is a moderated blog. No pornography, spam, profanity or discriminatory remarks are allowed. No personal attacks are allowed. Users should stay on topic to keep it relevant for the readers.
Read the privacy statement