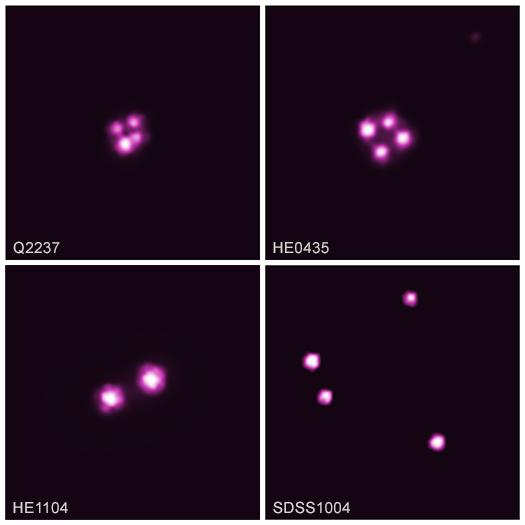 Like whirlpools in the ocean, spinning black holes in space create a swirling torrent around them. However, black holes do not create eddies of wind or water. Rather, they generate disks of gas and dust heated to hundreds of millions of degrees that glow in X-ray light.

Using data from NASA's Chandra X-ray Observatory and chance alignments across billions of light years, astronomers have deployed a new technique to measure the spin of five supermassive black holes. The matter in one of these cosmic vortices is swirling around its black hole at greater than about 70% of the speed of light.

The astronomers took advantage of a natural phenomenon called a gravitational lens. With just the right alignment, the bending of space-time by a massive object, such as a large galaxy, can magnify and produce multiple images of a distant object, as predicted by Einstein.

In this latest research, astronomers used Chandra and gravitational lensing to study five quasars, each consisting of a supermassive black hole rapidly consuming matter from a surrounding accretion disk. Gravitational lensing of the light from each of these quasars by an intervening galaxy has created multiple images of each quasar, as shown by these Chandra images of four of the targets. The sharp imaging ability of Chandra is needed to separate the multiple, lensed images of each quasar.

The key advance made by researchers in this study was that they took advantage of "microlensing," where individual stars in the intervening, lensing galaxy provided additional magnification of the light from the quasar. A higher magnification means a smaller region is producing the X-ray emission.

The results showed that one of the black holes, in the lensed quasar called the "Einstein Cross," (labeled Q2237 in the image above) is spinning at, or almost at, the maximum rate possible. This corresponds to the event horizon, the black hole's point of no return, spinning at the speed of light, which is about 670 million miles per hour. Four other black holes in the sample are spinning, on average, at about half this maximum rate.

How can these black holes spin so quickly? The researchers think that these supermassive black holes likely grew by accumulating most of their material over billions of years from an accretion disk spinning with a similar orientation and direction of spin, rather than from random directions. Like a merry-go-round that keeps getting pushed in the same direction, the black holes kept picking up speed.

The X-rays detected by Chandra are produced when the accretion disk surrounding the black hole creates a multimillion-degree cloud, or corona above the disk near the black hole. X-rays from this corona reflect off the inner edge of the accretion disk, and the strong gravitational forces near the black hole distort the reflected X-ray spectrum, that is, the amount of X-rays seen at different energies. The large distortions seen in the X-ray spectra of the quasars studied here imply that the inner edge of the disk must be close to the black holes, giving further evidence that they must be spinning rapidly.

The quasars are located at distances ranging from 9.8 billion to 10.9 billion light years from Earth, and the black holes have masses between 160 and 500 million times that of the sun. These observations were the longest ever made with Chandra of gravitationally lensed quasars, with total exposure times ranging between 1.7 and 5.4 days.

A paper describing these results is published in the July 2nd issue of The Astrophysical Journal, and is available online. The authors are Xinyu Dai, Shaun Steele and Eduardo Guerras from the University of Oklahoma in Norman, Oklahoma, Christopher Morgan from the United States Naval Academy in Annapolis, Maryland, and Bin Chen from Florida State University in Tallahassee, Florida.