Excavating a Dinosaur in a Galaxy Cluster 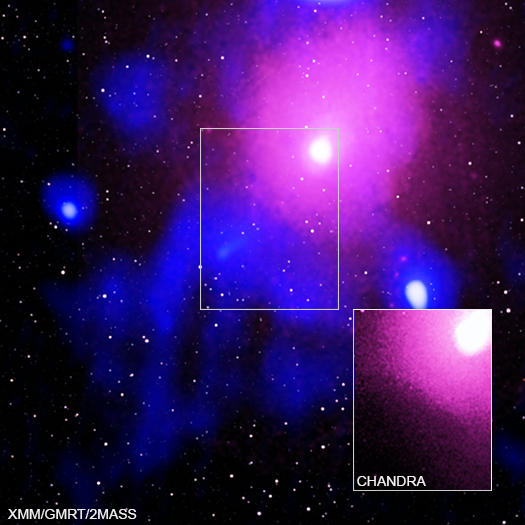 We are pleased to welcome two guest bloggers, Maxim Markevitch and Simona Giacintucci, who led the study described in our latest press release. Markevitch, an expert on galaxy clusters X-ray studies, got his PhD at the Space Research Institute of the Russian Academy of Sciences. He worked on ASCA X-ray data in Japan, then at the Chandra X-ray Center for the first 10 years of Chandra operations, and is now at the NASA Goddard Space Flight Center. He received the AAS Rossi Prize. Giacintucci, the lead author of the study, is an expert in radio phenomena in galaxy clusters. She got her PhD at Bologna University. She was a postdoc at the CfA and an Einstein fellow at the University of Maryland, and is now at the Naval Research Lab.

Galaxy clusters are colossal concentrations of dark matter, galaxies, and tenuous, 100-million-degree plasma. This plasma — gas where the electrons have been stripped from their atoms — slowly loses heat by emitting radiation in the form of X-rays. Around the central peaks of many clusters, where matter concentrates, the plasma gets dense enough* to cool quite fast, on a timescale shorter than the cluster's lifetime (a few billion years). The higher the plasma's density, the more X-rays it emits and the faster it cools. As it cools down, it contracts and becomes denser still, and so on, entering a runaway cooling process. Left unchecked, this process should deposit vast quantities of cold gas in the cluster centers.

We know for a fact that the plasma cools down because we do observe those X-rays — but we don't find nearly as much cold gas in the cluster centers as such runaway cooling must deposit. This has been a puzzle for a long while, and the solution the astronomers converged upon is that there must be some source of additional heat in the central regions of clusters — their “cores” — that doesn't let the plasma cool below 10 million degrees or so.

Early Chandra X-ray images of galaxy clusters pointed to the likely source: the supermassive black holes (SMBH) that sit in the centers of the cluster central galaxies, pull in the surrounding matter, and eject a tiny part of it (just before it sinks irretrievably into the black hole) at nearly the speed of light back into the surrounding gas. Where those jets hit the gas, they blow huge bubbles in it, stir it, generate shocks like sonic booms, etc. (all of these features have been seen in the Chandra images of the cluster cores). The current wisdom holds that these processes together supply the needed heat to prevent runaway cooling from occurring, but at the same time are not so powerful that they blow up the whole plasma cloud, implying some kind of a gentle, self-regulated feedback loop may be occurring.

What we found in the Ophiuchus galaxy cluster seems far outside this scenario. Like many clusters, it has a dense peak of rapidly-cooling plasma at the center, but curiously, the SMBH currently shows very little activity — just a very faint radio source and nothing in the X-rays. In 2016 a team of researchers led by Dr. Norbert Werner looked at the cluster with Chandra, and noticed another curiosity (published in the Monthly Notices of the Royal Astronomical Society): a concave edge in the X-ray emission at one side of the cooling core. They briefly entertained an idea that this edge may be part of a wall of a giant bubble blown by a jet emanating from the cluster center. But when they estimated how much energy would be required to blow such a bubble, they thought it was too large to be believable. So they concluded that the edge had to be something else — perhaps one of those wiggles caused by motion of gas over large scales seen in merging clusters, such as a giant wave seen in the Perseus galaxy cluster.

Meanwhile, astronomers in Australia have surveyed the sky with their new low-frequency radio telescope, the Murchison Widefield Array, or MWA, and found a bright extended source at the location of the Ophiuchus cluster. The radio spectrum (that is, intensity over a range of energies) they collected for this source was unusually steep — meaning that the source is much brighter at lower radio frequencies. We overlaid that radio image onto the Chandra and XMM-Newton X-ray images and realized that this exotic source is located right next to the concave X-ray edge. Intrigued, we then looked at archival data from another radio telescope, the Giant Metrewave Radio Telescope in India, which doesn't go quite as low in frequency as the MWA, but makes sharper images. It showed very clearly that the extended radio source fits the X-ray edge like a hand in a glove. This confirms the hypothesis — previously considered implausible — of a giant cavity in the cluster plasma filled with super-energetic electrons that generate the radio emission. (Our colleague Norbert Werner was very happy to have been proven too cautious!) 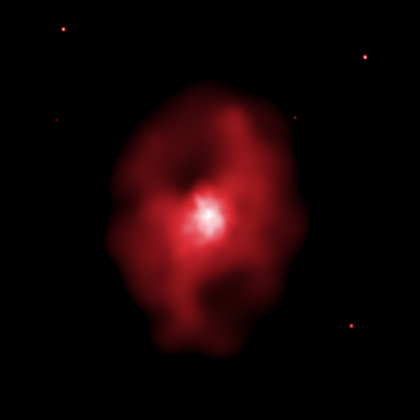 The bubble in the Ophiuchus cluster is exactly like the bubbles created by the central black holes in other cluster cooling cores, except this bubble is outside the core and its energy is enormous -- at least five times that of the previous record holder, MS 0735.6+7421. If such energy were deposited inside the cool core, it would have blown it up to shreds.

Even more interesting, because the bubble is seen only at low radio frequencies, the explosion must have happened long ago, probably a few hundred million years ago. As the energetic electrons age after their acceleration and ejection by the black hole, their higher-frequency radio emission fades first and the radio spectrum becomes very steep; this bubble is among the steepest cluster radio sources in the sky. So it looks like the SMBH has quieted down, the jets are long gone, and all that remains from that enormous explosion is the faint radio glow from this fossil cavity filled with aged electrons. This explosion could even have had a role in shutting down the SMBH power plant by pushing the cool core away and removing the black hole's fuel supply, though it's still difficult to imagine how the core has remained in one piece after such a push.

What's also puzzling is why we see only one bubble, since jets and bubbles usually come in pairs on the opposite sides of the black hole. We think that the companion bubble could have been swept away to the cluster outskirts by plasma streams and faded there — perhaps to be found someday at even lower radio frequencies.

This has been like discovering a dinosaur, with just a little piece (the unusual X-ray edge) sticking out at first and then suddenly a new kind of creature coming out from the ground. High-sensitivity imaging at very low radio frequencies is a recent capability, with MWA and LOFAR (a European low-frequency telescope) just starting to report their first findings. It is possible that comparing radio and X-ray cluster images will soon unearth many more such dinosaurs. If so, our current view of "gentle" black-hole feedback in galaxies and clusters would be seriously challenged.

"I was really happy when I saw these results," said Norbert Werner. "In our paper we considered the possibility that the feature is a result of a record-breaking black hole outburst, but we discounted it as unlikely. This is one of the nearest galaxy clusters and it appeared to be too much of a coincidence to see such an outburst in our cosmic backyard. Extraordinary claims need extraordinary evidence and the observation reported in this paper provides the evidence that we lacked."

----
[footnote]
* though its density is still 10^22 times lower than that of the air we breathe, lower than the best vacuum we can achieve on Earth.

Category:
Black Holes
Groups & Clusters of Galaxies
Quasars & Active Galaxies
Disclaimer: This service is provided as a free forum for registered users. Users' comments do not reflect the views of the Chandra X-ray Center and the Harvard-Smithsonian Center for Astrophysics.
Please note this is a moderated blog. No pornography, spam, profanity or discriminatory remarks are allowed. No personal attacks are allowed. Users should stay on topic to keep it relevant for the readers.
Read the privacy statement