The Crab Nebula contains the remains of an exploded star located about 6,500 light years from Earth. The powerhouse "engine" energizing the Crab system is a pulsar (a rapidly spinning neutron star), which is sending out bursts of radiation 30 times a second. Experts used X-ray data from NASA's Chandra X-ray Observatory to create a three-dimensional (3D) representation of the Crab for anyone to explore. The structures revealed by Chandra’s X-rays include the pulsar and a ringed disk of energized material, with jets of particles that fire off from opposite ends of the energetic pulsar.

In the year 1054 AD, Chinese sky watchers witnessed the sudden appearance of a "new star" in the heavens. They recorded as six times brighter than Venus, making it the brightest observed stellar event in recorded history. This "guest star," as they described it, was so bright that people saw it in the sky during the day for almost a month. Across the globe, Native Americans also recorded its mysterious appearance in petroglyphs.

In 1844, Lord Rosse observed the nebula with the largest telescope of the time and named the object the "Crab" because of its tentacle-like structure. But it wasn't until the 20th century that astronomers realized the nebula was the surviving relic of that 1054 supernova, the explosion of a massive star.

The Crab Nebula in Many Kinds of Light

The Crab Nebula consists of a “pulsar”, a rapidly rotating neutron star, at the center that is surrounded by a bright cloud of energized particles called a nebula. Both the nebula and the pulsar itself are bright sources of radiation in all wavelengths.

Modern astronomers have produced highly detailed images of the Crab Nebula from telescopes spanning nearly the entire breadth of the electromagnetic spectrum, from radio waves seen by the Karl G. Jansky Very Large Array (VLA) to ultraviolet light from XMM-Newton to the powerful X-ray glow as seen by the orbiting Chandra X-ray Observatory. And, in between, the Hubble Space Telescope's crisp visible-light view and the infrared perspective of the Spitzer Space Telescope. 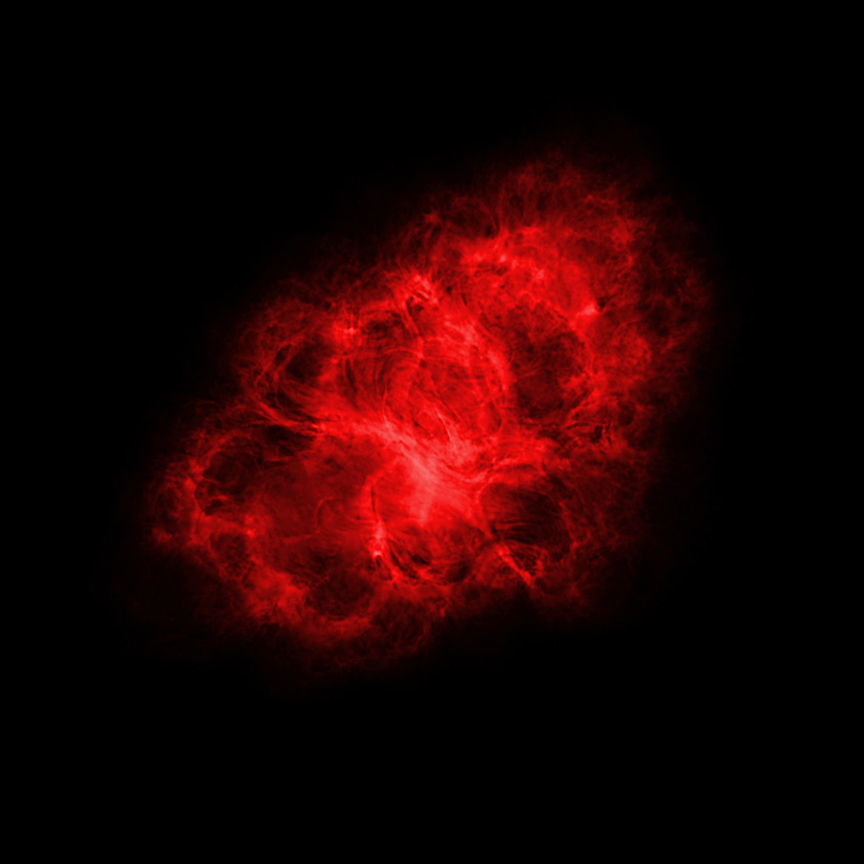 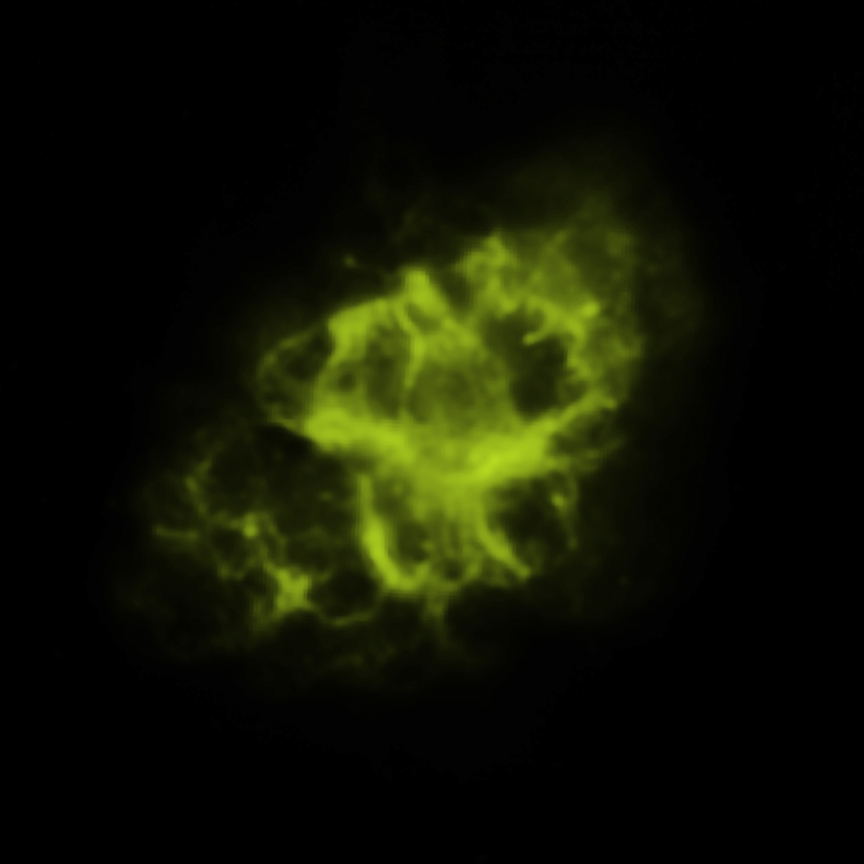 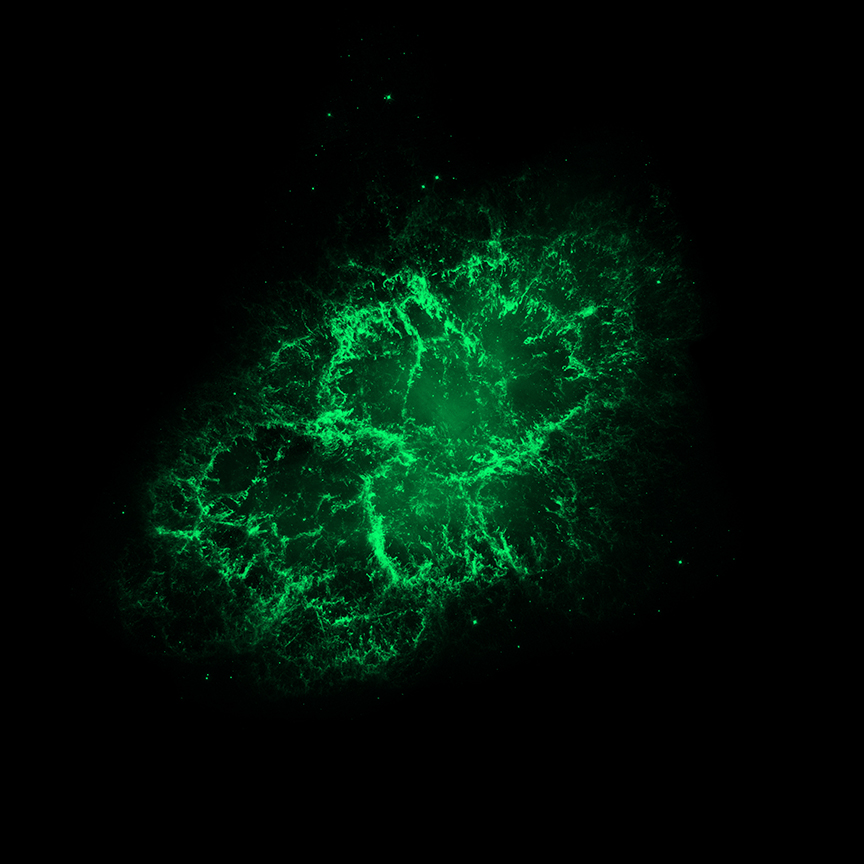 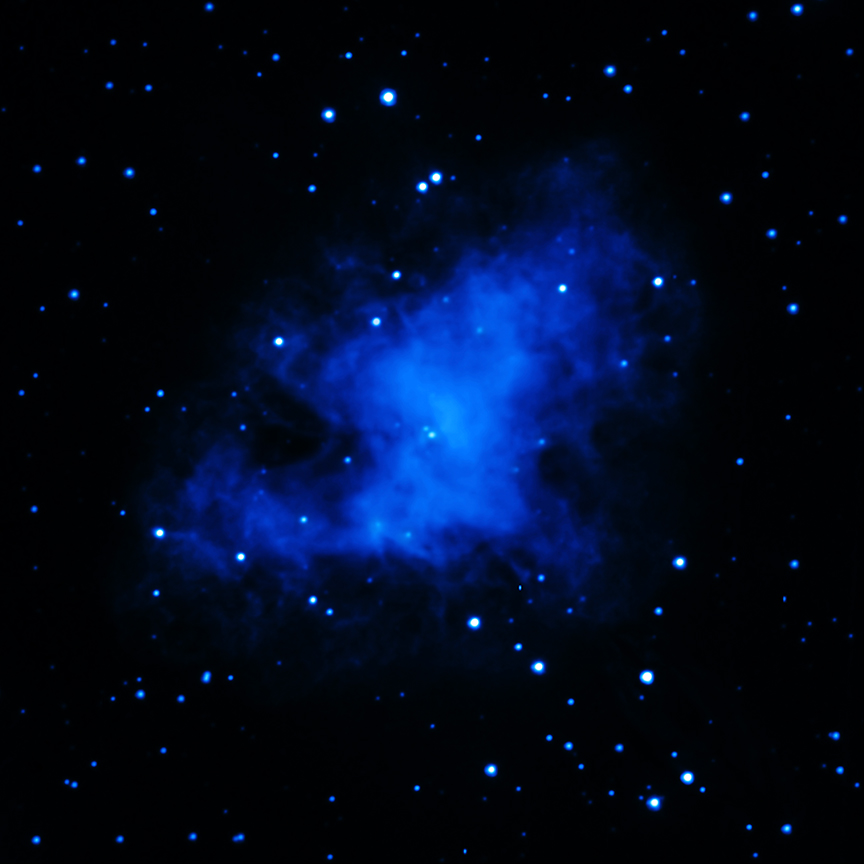 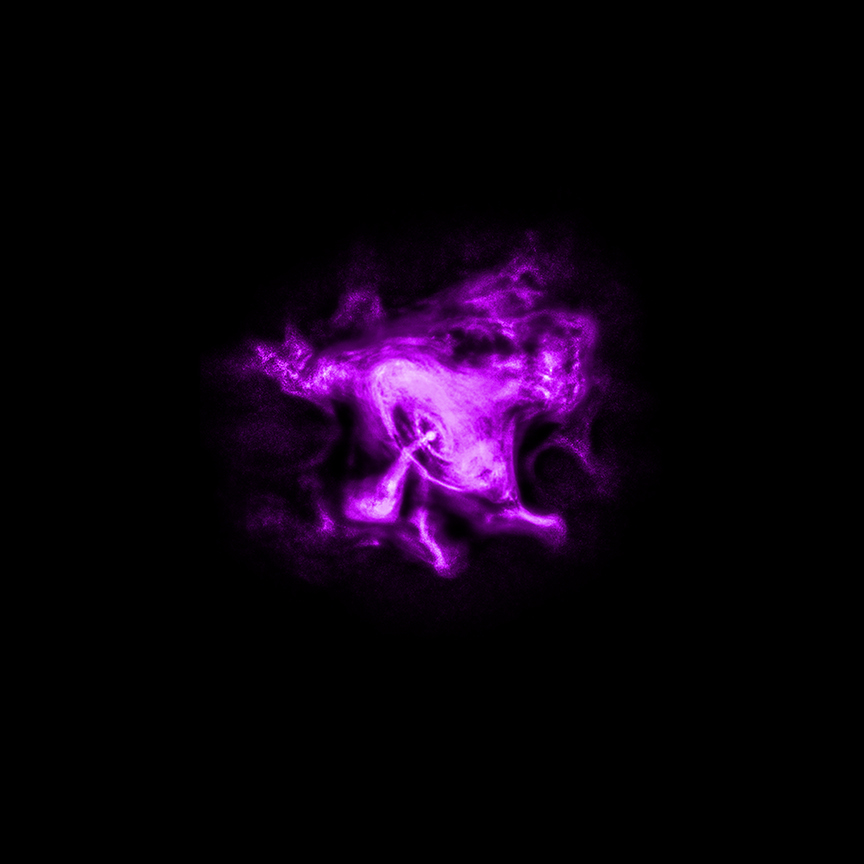 By comparing X-ray, optical, infrared, and radio images of the Crab, we can see that the nebula appears most compact in X-rays and largest in the radio. The X-ray nebula in the Chandra image is about 40% as large as the optical nebula from Hubble, which is in turn about 80% as large as the VLA’s radio image. This makes sense when we follow the history of energetic electrons produced by the neutron star. Electrons with very high energies radiate mostly X-rays.

Along with many other telescopes, Chandra has repeatedly observed the Crab Nebula over the course of the mission's lifetime. The Crab Nebula is one of the most studied objects in the sky, truly making it a cosmic icon. Time-lapse movies from NASA's Chandra X-ray Observatory show a sequence of Chandra images of the Crab Nebula.

The movie (below) shows dynamic rings, wisps and jets of matter and antimatter around the pulsar in the Crab Nebula as observed in X-ray light by Chandra. The movie was made from 7 still images of Chandra observations taken between November 2000 and April 2001. To produce a movie of reasonable length the sequence was looped several times, as in looped weather satellite images. The inner ring is about one light year across.

The Chandra images in this time-lapse were taken over a span of several months from 2000-2001.

Dramatic variations are seen in this more recent time-lapse video (below), including the expansion of a ring of X-ray emission around the pulsar (white dot near center) and changes in the knots within this ring. Chandra observed the Crab on monthly intervals beginning six days after the discovery of a gamma-ray flare in September 2010. This established a baseline of seven images of the nebula before a superflare was seen in 2011. When scientists saw that more flaring activity was beginning in April 2011, a pre-planned set of five Chandra observations was initiated. Two of these observations were made when strong gamma-ray flares occurred, but no clear evidence was seen for correlated flares in the Chandra images. The movie shows the April observations in "slow motion" to focus on the time when the gamma-ray superflares occurred. The movie shows three loops through the sequence of images, along with a timeline near the bottom.

This Chandra movie shows changes in the Crab Nebula from September 2010 to April 2011.

Now, astronomers and visualization specialists from NASA's Universe of Learning combined the visible, infrared, and X-ray vision of NASA's Great Observatories to create a three-dimensional representation of the dynamic Crab Nebula. Certain structures and processes, driven by the pulsar engine at the heart of the nebula, are best seen at particular wavelengths.

The new multiwavelength 3D computer graphics visualization below is based on images from the Chandra X-ray Observatory and the Hubble and Spitzer space telescopes. The video dissects the intricate nested structure that makes up this stellar corpse, giving viewers a better understanding of the extreme and complex physical processes powering the nebula. The powerhouse "engine" energizing the entire system is a pulsar, a rapidly spinning neutron star, the super-dense crushed core of the exploded star. The tiny dynamo is blasting out blistering pulses of radiation towards us 30 times a second with unbelievable clockwork precision.

The movie begins by showing the Crab Nebula in context, pinpointing its location in the constellation Taurus. This view zooms in to present the Hubble, Spitzer, and Chandra images of the Crab Nebula, each highlighting one of the nested structures in the system. The video then begins a slow buildup of the three-dimensional X-ray structure, showing the pulsar and a ringed disk of energized material, and adding jets of particles firing off from opposite ends of the energetic dynamo.

Appearing next is a rotating infrared view of a cloud enveloping the pulsar system, and glowing from synchrotron radiation. This distinctive form of radiation occurs when streams of charged particles spiral around magnetic field lines. There is also infrared emission from dust and gas.

The visible-light outer shell of the Crab Nebula appears next. Looking like a cage around the entire system, this shell of glowing gas consists of tentacle-shaped filaments of ionized oxygen (oxygen atoms missing one or more electrons). The tsunami of particles unleashed by the pulsar is pushing on this expanding debris cloud like an animal rattling its cage.

The three-dimensional interpretation is guided by science data and evidence, scientific knowledge and intuition, and artistic license. Starting with the two-dimensional Hubble, Spitzer, and Chandra images, the team worked with experts to analyze the complex nested structures comprising the nebula and identify the best wavelength to represent each structure.

The three-dimensional structures serve as scientifically informed approximations for visualizing the nebula. The nested structures show that the nebula is not a classic supernova remnant, as once commonly thought, but that the system is better classified as a pulsar wind nebula. A traditional supernova remnant consists of a blast wave, and debris from the supernova that has been heated to millions of degrees. In a pulsar wind nebula, the system's inner region consists of lower-temperature gas that is heated up to thousands of degrees by the high-energy synchrotron radiation.

The 3D model serves as scientifically informed approximation for visualizing the nebula in X-ray light. The nested structures of the Crab show that the nebula is not a classic supernova remnant, but a pulsar wind nebula. A traditional supernova remnant consists of a blast wave, and debris from the supernova that has been heated to millions of degrees. In a pulsar wind nebula, the system's inner region consists of lower-temperature gas that is heated up to thousands of degrees by the high-energy synchrotron radiation.

Select the 3D printer of your choice to make your own Crab pulsar. Download the files below. For our 3D-printed example shown here, one color of PLA filament was used. Support structures were required, and removed after printing by using a dissolvable substrate with minimal hand-cleaning required.

LINKS TO OTHER ACTIVITIES

Make the Most of Your Universe

Developed by the Chandra X-ray Center, at the Smithsonian Astrophysical Observatory, in Cambridge, MA, with funding by NASA under contract NAS8-03060   |   Privacy  |  Accessibility