A Cosmic Jekyll and Hyde 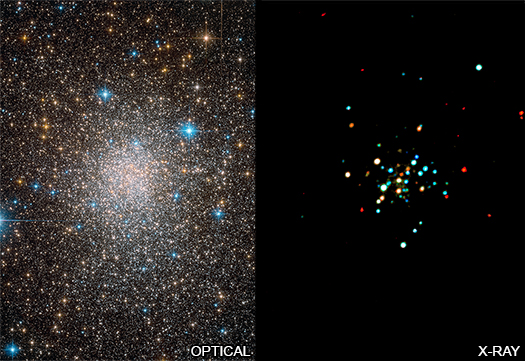 A double star system has been flipping between two alter egos, according to observations with NASA's Chandra X-ray Observatory and the National Science Foundation's Karl F. Jansky Very Large Array (VLA). Using nearly a decade and a half worth of Chandra data, researchers noticed that a stellar duo behaved like one type of object before switching its identity, and then returning to its original state after a few years. This is a rare example of a star system changing its behavior in this way.

Astronomers found this volatile double, or binary, system in a dense collection of stars, the globular cluster Terzan 5, which is located about 19,000 light years from Earth in the Milky Way galaxy. This stellar duo, known as Terzan 5 CX1, has a neutron star (the extremely dense remnant left behind by a supernova explosion) in close orbit around a star similar to the Sun, but with less mass.

In this new image of Terzan 5 (right), low, medium and high-energy X-rays detected by Chandra are colored red, green and blue respectively. On the left, an image from the Hubble Space Telescope shows the same field of view in optical light. Terzan 5 CX1 is labeled as CX1 in the Chandra image.

In binary systems like Terzan 5 CX1, the heavier neutron star pulls material from the lower-mass companion into a surrounding disk. Astronomers can detect these so-called accretion disks by their bright X-ray light, and refer to these objects as "low-mass X-ray binaries."

While scientists expect the complete evolution of a low-mass X-ray binary into a millisecond pulsar should happen over several billion years, there is a period of time when the system can switch rapidly between these two states. Chandra observations of Terzan 5 CX1 show that it was acting like a low-mass X-ray binary in 2003, because it was brighter in X-rays than any of the dozens of other sources in the globular cluster. This was a sign that the neutron star was likely accumulating matter. 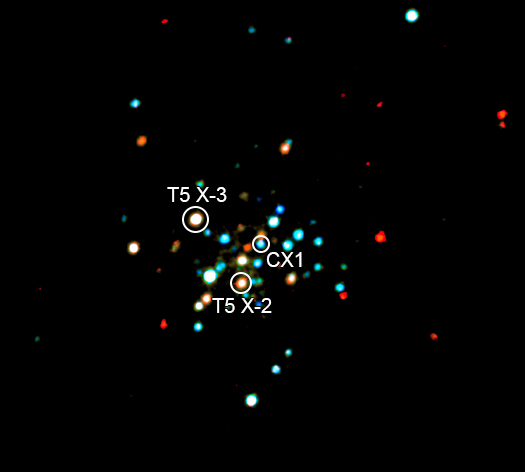 In Chandra data taken from 2009 to 2014, Terzan 5 CX1 had become about ten times fainter in X-rays. Astronomers also detected it as a radio source with the VLA in 2012 and 2014. The amount of radio and X-ray emission and the corresponding spectra (the amount of emission at different wavelengths) agree with expectations for a millisecond pulsar. Although the radio data used did not allow a search for millisecond pulses, these results imply that Terzan 5 CX1 underwent a transformation into behaving like a millisecond pulsar and was blowing material outwards. By the time Chandra had observed Terzan 5 CX1 again in 2016, it had become brighter in X-rays and changed back to acting like a low-mass X-ray binary again.

To confirm this pattern of "Jekyll and Hyde" behavior, astronomers need to detect radio pulses while Terzan 5 CX1 is faint in X-rays. More radio and X-ray observations are planned to search for this behavior, along with sensitive searches for pulses in existing data. Only three confirmed examples of these identity-changing systems are known, with the first discovered in 2013 using Chandra and several other X-ray and radio telescopes.

The study of this binary was led by Arash Bahramian of the International Centre for Radio Astronomy Research (ICRAR), Australia and was published in the September 1st, 2018 issue of The Astrophysical Journal. A preprint is available here.

Two other recent studies have used Chandra observations of Terzan 5 to study how neutron stars in two different low-mass X-ray binaries recover after having had large amounts of material dumped on their surface by a companion star. Such studies are important for understanding the structure of a neutron star's outer layer, known as its crust.

In one of these studies, of the low-mass X-ray binary Swift J174805.3–244637 (T5 X-3 for short), material dumped onto the neutron star during an X-ray outburst detected by Chandra in 2012 heated up the star's crust. The crust of the neutron star then cooled down, taking about a hundred days to fall back to the temperature seen before the outburst. The rate of cooling agrees with a computer model for such a process.

In a separate Chandra study of a different low-mass X-ray binary in Terzan 5, IGR J17480–2446 (T5 X-2 for short) the neutron star was still cooling when its temperature was taken five and a half years after it was known to have an outburst. These results show this neutron star's crust ability to transfer, or conduct, heat may be lower than what astronomers have found in other cooling neutron stars in low-mass X-ray binaries. This difference in the ability to conduct heat may be related to T5 X-2 having a higher magnetic field compared to other cooling neutron stars, or being much younger than T5 X-3.