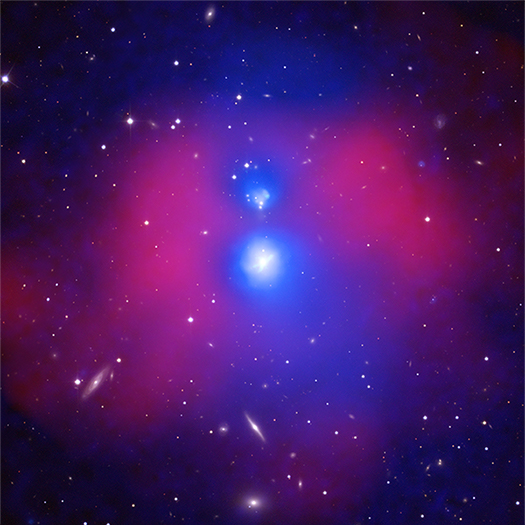 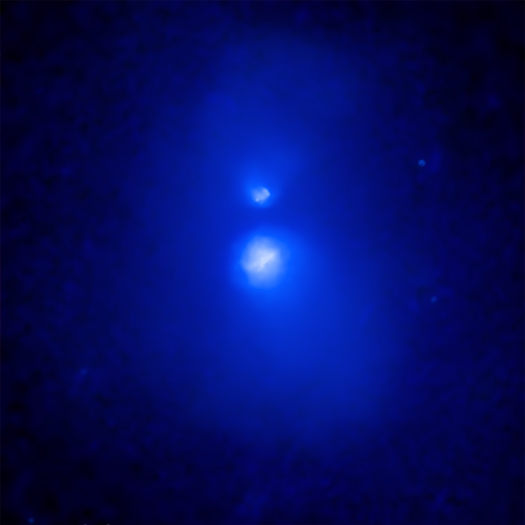 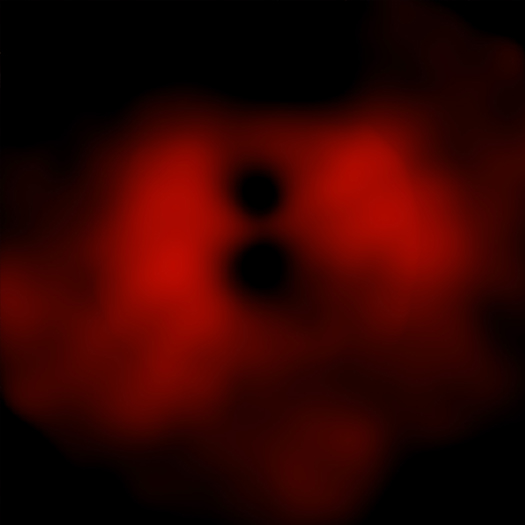 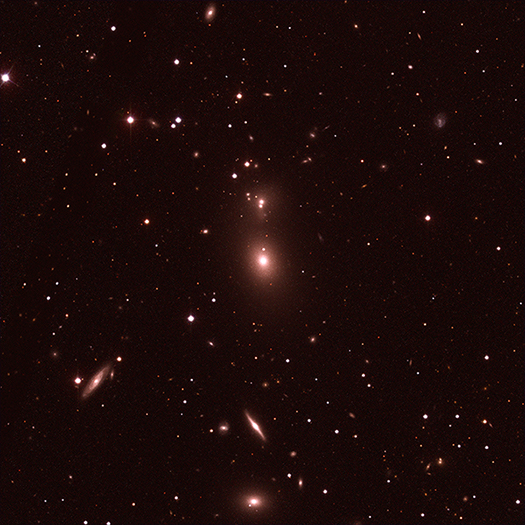 As the holiday season approaches, people in the northern hemisphere will gather indoors to stay warm. In keeping with the season, astronomers have studied two groups of galaxies that are rushing together and producing their own warmth.

The majority of galaxies do not exist in isolation. Rather, they are bound to other galaxies through gravity either in relatively small numbers known as "galaxy groups," or much larger concentrations called "galaxy clusters" consisting of hundreds or thousands of galaxies. Sometimes, these collections of galaxies are drawn toward one another by gravity and eventually merge.

Using NASA's Chandra X-ray Observatory, ESA's XMM-Newton, the Giant Metrewave Radio Telescope (GMRT), and optical observations with the Apache Point Observatory in New Mexico, a team of astronomers has found that two galaxy groups are smashing into each other at a remarkable speed of about 4 million miles per hour. This could be the most violent collision yet seen between two galaxy groups.

The system is called NGC 6338, which is located about 380 million light years from Earth. This composite image contains X-ray data from Chandra (displayed in red) that shows hot gas with temperatures upward of about 20 million degrees Celsius, as well as cooler gas detected with Chandra and XMM (shown in blue) that also emits X-rays. The Chandra data have been combined with optical data from the Sloan Digital Sky Survey, showing the galaxies and stars in white.

The researchers estimate that the total mass contained in NGC 6338 is about 100 trillion times the mass of the Sun. This significant heft, roughly 83% of which is in the form of dark matter, 16% is in the form of hot gas, and 1% in stars, indicates that the galaxy groups are destined to become a galaxy cluster in the future. The collision and merger will complete, and the system will continue to accumulate more galaxies through gravity.

Previous studies of NGC 6338 have provided evidence for the regions of cooler, X-ray emitting gas around the centers of the two galaxy groups (known as "cool cores"). This information has helped astronomers to reconstruct the geometry of the system, revealing that the collision between the galaxy groups happened almost along the line of sight to Earth. This finding has been confirmed with the new study.

The new Chandra and XMM-Newton data also show that the gas to the left and right of the cool cores, and in between them, appears to have been heated by shock fronts — similar to the sonic booms created by supersonic aircraft — formed by the collision of the two galaxy groups. This pattern of shock-heated gas has been predicted by computer simulations, but NGC 6338 may be the first merger of galaxy groups to clearly show it. Such heating will prevent some of the hot gas from cooling down to form new stars.

A second source of heat commonly found in groups and clusters of galaxies is energy provided by outbursts and jets of high-speed particles generated by supermassive black holes. Currently this source of heat appears to be inactive in NGC 6338 because there is no evidence for jets from supermassive black holes using radio data from the GMRT. This absence may explain the filaments of cooling gas detected in X-ray and optical data around the large galaxy in the center of the cool core in the south. The filters used in the composite image do not show the optical filaments, and the X-ray filaments are the small, finger-like structures emanating from the center of the cool core in the south, at approximately 2 o'clock, 7 o'clock and 8 o'clock.

A paper describing these results was published in the September 2019 issue of the Monthly Notices of the Royal Astronomical Society and is available online. The first author is Ewan O'Sullivan of the Center for Astrophysics | Harvard & Smithsonian (CfA) in Cambridge, Massachusetts, and the co-authors are Gerrit Schellenberger (CfA), Doug Burke (CfA), Ming Sun (University of Alabama in Huntsville, Alabama), Jan Vrtilek (CfA), Larry David (CfA) and Craig Sarazin (University of Virginia, Virginia).