We keep an eye out for all things astronomical in the news - especially when the words "Chandra" or "X-ray" pop up. Over the weekend, we noticed a story about both of these things, but this time it had nothing to do with us! [First image of moon's Haworth crater] The result was from an Indian spacecraft in orbit around the Moon that sent back some X-ray data of the surface. The Moon-orbiting spacecraft is named â€œChandrayaan,â€ which, according to their website , means "Moon and vehicle" in both Sanskrit and Hindi. This exciting mission was launched just this past fall and weâ€™re sure it has lots more exciting stuff to reveal.

Our beloved Chandra also has a story behind its name. The observatory was renamed for Subrahmanyan Chandrasekhar, the late Indian-American Nobel laureate, shortly after launch in 1999. (Prior to this, the mission was known as the Advanced X-ray Astrophysical Facility, or AXAF.) He was widely known as â€œChandraâ€ which, as we just mentioned, means "Moon" or "luminous" in Sanskrit. Chandra, the astrophysicist, did much of the theoretical work that laid the basis for much of modern astrophysics that Chandra, the mission, continues to explore today. 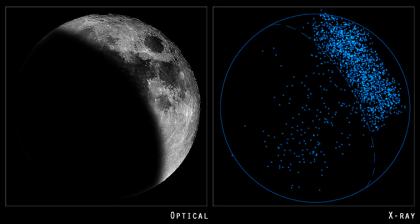 By the way, our Chandra mission has done its own study of our Moon. Back in 2003, we released these results. While targeting Solar System objects like the Moon isnâ€™t its primary objective, Chandra does look at objects close to home from time to time. But in case we donâ€™t get back to it for a while, itâ€™s good to know that Chandrayaan has got the Moon covered.