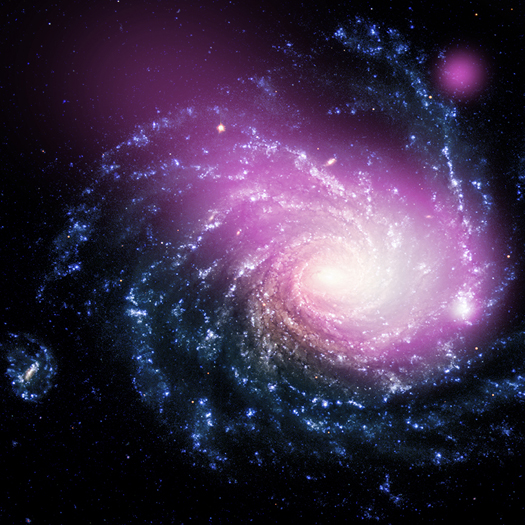 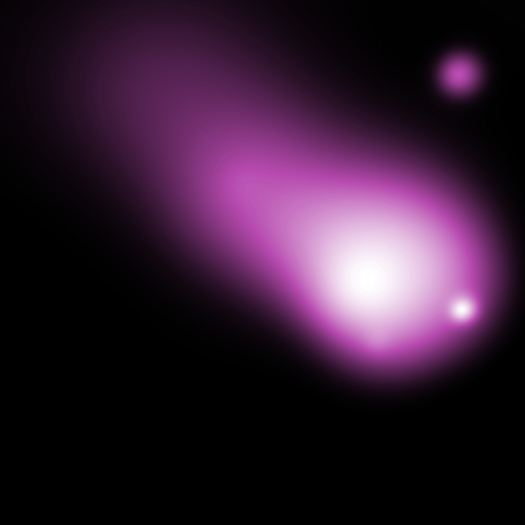 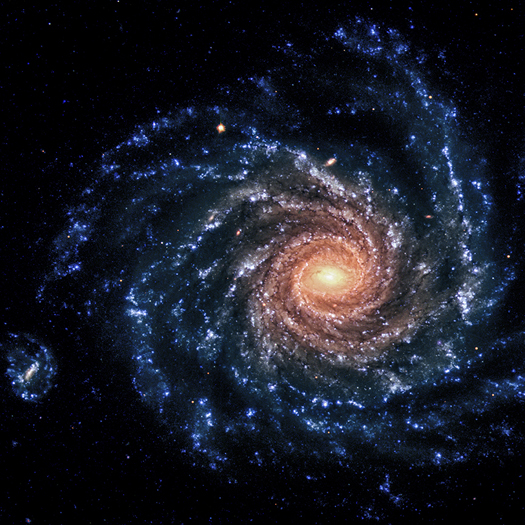 Observations with NASA's Chandra X-ray Observatory have revealed a massive cloud of multimillion-degree gas in a galaxy about 60 million light years from Earth. The hot gas cloud is likely caused by a collision between a dwarf galaxy and a much larger galaxy called NGC 1232. If confirmed, this discovery would mark the first time such a collision has been detected only in X-rays, and could have implications for understanding how galaxies grow through similar collisions.

An image combining X-rays and optical light shows the scene of this collision. The impact between the dwarf galaxy and the spiral galaxy caused a shock wave - akin to a sonic boom on Earth - that generated hot gas with a temperature of about 6 million degrees. Chandra X-ray data, in purple, show the hot gas has a comet-like appearance, caused by the motion of the dwarf galaxy. Optical data from the European Southern Observatory's Very Large Telescope reveal the spiral galaxy in blue and white. X-ray point sources have been removed from this image to emphasize the diffuse emission.

Near the head of the comet-shaped X-ray emission (mouse over the image for the location) is a region containing several very optically bright stars and enhanced X-ray emission. Star formation may have been triggered by the shock wave, producing bright, massive stars. In that case X-ray emission would be generated by massive star winds and by the remains of supernova explosions as massive stars evolve.

The mass of the entire gas cloud is uncertain because it cannot be determined from the two-dimensional image whether the hot gas is concentrated in a thin pancake or distributed over a large, spherical region. If the gas is a pancake, the mass is equivalent to forty thousand Suns. If it is spread out uniformly, the mass could be much larger, about three million times as massive as the Sun. This range agrees with values for dwarf galaxies in the Local Group containing the Milky Way.

The hot gas should continue to glow in X-rays for tens to hundreds of millions of years, depending on the geometry of the collision. The collision itself should last for about 50 million years. Therefore, searching for large regions of hot gas in galaxies might be a way to estimate the frequency of collisions with dwarf galaxies and to understand how important such events are to galaxy growth.

An alternative explanation of the X-ray emission is that the hot gas cloud could have been produced by supernovas and hot winds from large numbers of massive stars, all located on one side of the galaxy. The lack of evidence of expected radio, infrared, or optical features argues against this possibility.

A paper by Gordon Garmire of the Huntingdon Institute for X-ray Astronomy in Huntingdon, PA describing these results is available online and was published in the June 10th, 2013 issue of The Astrophysical Journal.

It is believed, DM Walker, that our galaxy has been in collisions before with smaller galaxies that are in the local group of which we are part.

Very few suns collide in galactic mergers because they are so far apart in galaxies.

Very interesting, but it put to think, what will come more now to our Earth?

When I read about such large scale events, I always wonder how we would be affected if they occurred in our galaxy. This would be one example and gamma ray bursts would be another.

Found this captured observation to be very interesting since, I normaly appreciate/enjoy any further discoveries/research behind galactic amalgamations that, occurr in the far reaches of the known Universe.