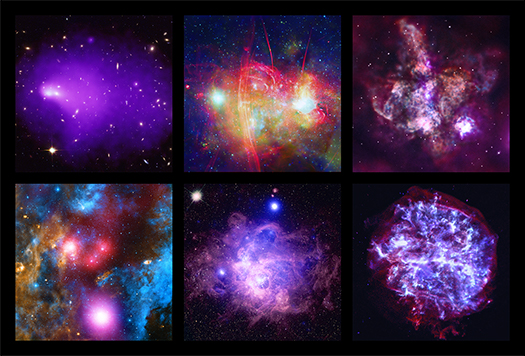 To commemorate the 20th anniversary of NASA's Chandra X-ray Observatory, an assembly of new images is being released. These images represent the breadth of Chandra's exploration, demonstrating the variety of objects it studies as well as how X-rays complement the data collected in other types of light. Some of these images contain Chandra data exclusively and the rest show how X-rays fit with the different types of light that other telescopes collect.

The 20th anniversary images are from left to right:

Abell 2146:
The colossal system Abell 2146 is the result of a collision and merger between two galaxy clusters. Astronomers think that galaxy clusters, the largest structures in the Universe held together by gravity, grow by colliding and merging with one another. Mergers of galaxy clusters are some of the most energetic events since the Big Bang. Chandra has observed many galaxy cluster mergers, giving scientists insight into how these mega-structures that dominate the Universe came to be.

In this image of Abell 2146, X-rays from Chandra (purple) show hot gas and optical data from the Hubble Space Telescope shows galaxies and stars. The bullet-shaped feature shows the hot gas from one cluster plowing through the hot gas in the other cluster.

Sagittarius A* (Galactic Center):
The central region of our galaxy, the Milky Way, contains an exotic collection of objects, including a supermassive black hole weighing about 4 million times the mass of the Sun (called Sagittarius A*), clouds of gas at temperatures of millions of degrees, neutron stars and white dwarf stars tearing material from companion stars and beautiful tendrils of radio emission.

The region around Sagittarius A* is shown in this new composite image with Chandra data (green and blue) combined with radio data (red) from the MeerKAT telescope in South Africa, which will eventually become part of the Square Kilometer Array (SKA).

30 Doradus:
At the center of 30 Doradus, one of the largest star-forming regions located close to the Milky Way, thousands of massive stars are blowing off material and producing intense radiation along with powerful winds. Chandra detects gas that has been heated to millions of degrees by these stellar winds and also by supernova explosions that mark the end of some giant stars' lives. These X-rays come from shock fronts, similar to sonic booms produced by supersonic airplanes, that rumble through the system.

This new Chandra image of 30 Doradus, which is nicknamed the "Tarantula Nebula," contains data from several long observations totaling almost 24 days of observing spread out over about 700 days. The colors in this Chandra image are red, green and purple to highlight low, medium and high X-ray energies respectively.

Astronomers used the long set of Chandra observations to discover that one of the bright X-ray sources shows regular variations in its X-ray output, with a period of 155 days. This variation originates from two massive stars orbiting each other, in a double-star system called Melnick 34. Follow-up observations with the European Southern Observatory's Very Large Telescope and the Gemini Observatory, both in Chile, measured the change in velocities of both stars during their orbit, leading to mass estimates of 139 and 127 times the mass of the sun. This makes Melnick 34 the most massive binary known, as reported in a paper published earlier this year, led by Katie Tehrani of the University of Sheffield in the UK. Within about two or three million years, both stars should implode to form black holes. If the binary survives these violent events, the black holes might eventually merge to produce a burst of gravitational waves.

The X-rays likely originate from shock waves generated by the collision of material blowing away from the surfaces of both stars, making Melnick 34 a "colliding-wind binary".

Cygnus OB2:
Stars come in different sizes and masses. Our Sun is an average-sized star that will have a lifespan of some 10 billion years. More massive stars, like those found in Cygnus OB2, only last a few million years. During their lifetimes, they blast large amounts of high-energy winds into their surroundings. These violent winds can collide or produce shocks in the gas and dust around the stars, depositing large amounts of energy that produce X-ray emission that Chandra can detect.

NGC 604:
The nearby galaxy Messier 33 contains a star-forming region called NGC 604 where some 200 hot, young, massive stars reside. The cool dust and warmer gas in this stellar nursery appear as the wispy structures in an optical image from the Hubble Space Telescope. In between these filaments are giant voids that are filled with hot, X-ray-emitting gas. Astronomers think these bubbles are being blown off the surfaces of the young and massive stars throughout NGC 604.

NGC 604 also likely contains an extreme member of the class of colliding-wind binaries, as reported in a recent paper led by Kristen Garofali of the University of Arkansas in Fayetteville, Arkansas. It is the first candidate source in this class to be discovered in M33 and the most distant example known, and shares several properties with the famous, volatile system called Eta Carinae, located in our galaxy.

Chandra's X-ray data (blue) are combined in this image with optical data from Hubble (purple).

G292:
Supernova remnants are the debris from exploded stars. G292.0+1.8 is a rare type of supernova remnant observed to contain large amounts of oxygen. Because they are one of the primary sources of the heavy elements (that is, everything other than hydrogen and helium) necessary to form planets and people, these oxygen-rich supernova remnants are important to study. The X-ray image of G292+1.8 from Chandra shows a rapidly expanding, intricately structured field left behind by the shattered star. The image is colored red, green, teal and purple in X-rays ranging from the lowest to highest energy levels.

Recently the first detection was made of iron debris from the exploded star, as reported in a paper led by Jayant Bhalerao of the University of Texas at Arlington in Texas. They constructed a map of this debris, along with that of silicon and sulphur, to understand more about the explosion. They found that these three elements are mainly located in the upper right of the remnant. This is in the opposite direction from the neutron star that was formed in the explosion, and was then kicked towards the lower left of the remnant. This suggests that the origin of this kick is gravitational and fluid forces from an asymmetric explosion. If more than half of the star's debris is ejected in one direction, then the neutron star is kicked in the other direction so that momentum is conserved. This finding argues against the idea that the copious amounts of neutrinos formed in the supernova explosion were emitted in a lop-sided direction, imparting a kick to the neutron star.